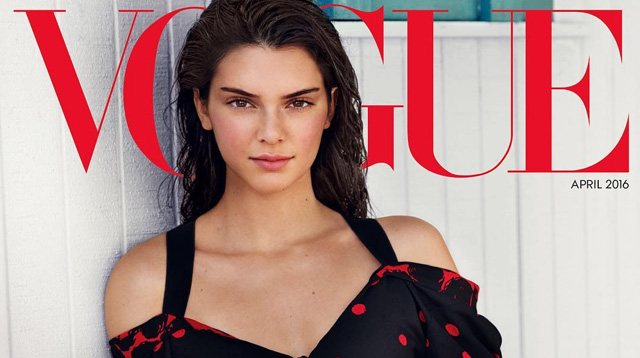 Kim Kardashian's younger sister stars on the subscribers' edition of the April issue, showing off her enviable figure in a Proenza Schouler bikini photographed by Mario Testino.

In the accompanying article, Vogue contributor Robert Sullivan marvels at the 20-year-old's rapid rise to fame.

"Kendall Jenner's arrival in the fashion world isn't quite out of nowhere," he wrote, "and only two years after walking her first Marc Jacobs show, she is less like a player than a small planet, with connections to a universe of celebrities and models and designers, and with about as many followers on Instagram as there are residents of South Korea."


The stunner boasts 52 million followers on Instagram alone, and she attributes her social media popularity to the fact she doesn't overshare.

"It has to be organic," she explained of her posts. "It means you can't totally plan it out."

She also tries to maintain an air of "mystery" about her, adding, "You don't want to do too many posts. You want to leave them wanting to come back."

Despite doling out her Instagram tips, Kendall insists she is still baffled by how much attention people pay to celebrities' social media accounts.

"I mean, it's so crazy to me 'cause it's so not real life—to stress out about a social-media thing," she said.

In the article, which gives fans an insight into a day in her busy schedule, Kendall admitted she has no plans to further her education, stating, "You talk to people and they say the reason they went to college was to get a job, but I already have a job, so..."

And she has no regrets about pursuing her runway dreams at a young age: "I could have done a lot of things, but I chose to be this baby businesswoman," she explained.

The beauty has already built up an impressive resume in just a short period of time, and one of her biggest fans is Chanel icon Karl Lagerfeld.

"She is a very sweet person," he told Vogue. "Very caring and not at all spoiled by those superficial successes. I must say I love her."

Meanwhile, Kendall gushed about her latest modeling achievement by sharing her Vogue cover with fans on Twitter.

"my very own Vogue Magazine," she tweeted. "WHOLE THING. JUST ME. honored to be the special edition! @voguemagazine @mariotestino".