She went into labor before she knew the 'full scope' of the situation.
by Anna Lewis | May 11, 2018
Post a Comment
Featured

Khloe Kardashian and Tristan Thompson welcomed their daughter on April 12, which was sadly slap, bang in the middle of cheating allegations against Tristan.

But despite all that going on, Khloe appeared to stand by Tristan when she revealed the little one's name was True Thompson four days later.

She captioned a snap of lots and lots and LOTS of pink balloons with: "Our little girl, True Thompson, has completely stolen our hearts and we are overwhelmed with LOVE. Such a blessing to welcome this angel into the family! Mommy and Daddy loooooove you True!"

But according to Us Weekly, Khloe chose the name True way before she knew the "full scope" of the Tristan cheating situation, and many believed she would pick a different name in the aftermath of the scandal.

"True had already been picked for a while," an insider told the magazine. "She went into labor not even knowing the full scope of the cheating so the option of changing her name wasn't even brought up. It's too much for one person to deal with during the crazy time." 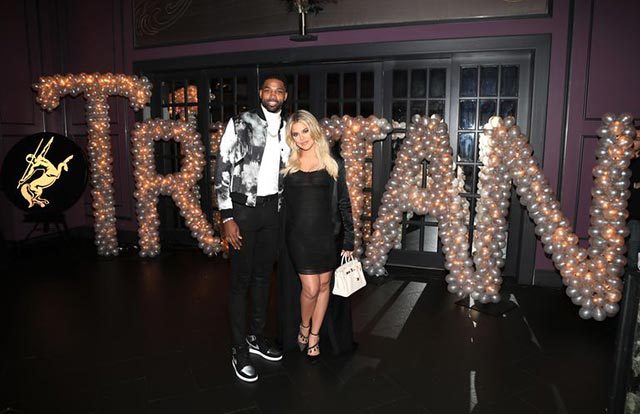 The source also goes on to say that people were hesitant to send Khloe gifts until she'd confirmed True's name. And everything Khloe bought for the baby during her pregnancy was monogrammed with "True." So having a change of heart on her daughter's name would have been a bit tricky.

It's also been reported that Khloe had to think long and hard about giving her daughter the surname Thompson instead of Kardashian.

When the cheating allegations came to light, "she was beyond conflicted on whether to go with Kardashian or Thompson when it was time to fill out True's birth certificate," a source told TMZ.

It reportedly took Khloe a few days to complete True's birth certificate, and it wasn't until well after the 12th that she reportedly decided to go with True Thompson, as she felt it was the "right thing to do."