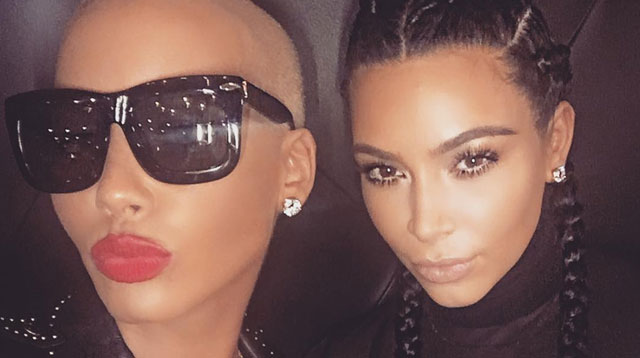 ICYDK, the pair has had a complicated and rocky relationship over the years, as Amber formerly dated Kim's husband Kanye West and the ex-couple split on bad terms.

The snap is made even more surprising following Kanye's now infamous Twitter rant against Wiz Khalifa, the father of Amber's son.

Following the rant, which Kanye deleted, Amber took to Twitter to make her own contribution, in which she made some very raunchy comments about her and Kanye's sex life.

But on Tuesday, Kim set social media on fire when she posted a shot of herself and Amber, alongside the caption: "Tea anyone?"

In the snap, the pair seemed to look like good friends as they pose next to each while pouting.

The rant between Kanye and Wiz began when the “Stronger” rapper misinterpreted the “Black and Yellow” hitmaker's reference to marijuana as a swipe at Kim.

Kanye thought Wiz's "Hit this kk and become yourself" was an insult to reality star Kim, when it was actually a reference to the rapper's Khalifa Kush weed brand, and Kanye launched into a foul-mouthed rant aimed at the fellow hip-hop star on social media, during which he mentioned Wiz's son Sebastian with ex-wife Rose.

"You let a stripper trap you," he taunted. "I know you mad every time you look at your child that this girl got you for 18 years."

Wiz didn't waste any time in firing back: "KK is weed fool," he clarified, prompting a humbled Kanye to respond with, "I'm happy that I now know that KK means weed... please excuse the confusion."

Kanye then appeared to put an end to the feud once and for all on Tuesday afternoon, tweeting, "Me and Wiz spoke yesterday. Great convo. All positive."

Kanye has also since apologized for referencing Sebastian in the rant, tweeting, "God's dream... Never speak on kids again... all love ... all blessings..."