It's been highly speculated these past few months that Kris Aquino was cast in the Hollywood movie adaptation of the best-selling Kevin Kwan novel Crazy Rich Asians. While the Queen of All Media has been posting not-so-subtle hints about her international project, her most recent photo ~*confirms*~ she's on her way to making her Hollywood debut!

Kris just posted a photo with Fresh Off The Boat star Constance Wu, who is playing the lead role of Rachel Chu in the upcoming film. Kris writes, "#fangirl moment. We've seen every episode of the 3 seasons of #freshofftheboat & so happy they've been renewed for Season 4! Thank You @wonstancecoo (Jessica Huang, the Mom of Eddie, Emery, and Evan & Louis' wife) for being so gracious, I know how exhausted she was BUT she still made the effort to pleasantly converse w/ me."


But that's not all! Constance sent a reply to Kris saying, "So great to meet you! See ya tomorrow." 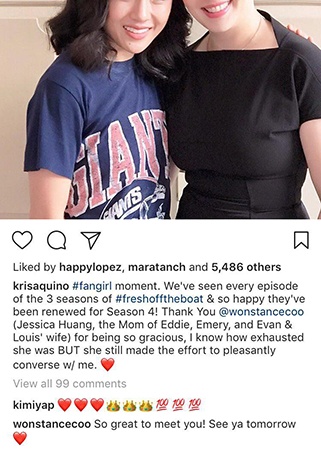 ICYDK, Kris flew off to Singapore on Monday to start shooting for her undisclosed project. Kris brought along her custom made Michael Cinco and Michael Leyva costumes and her glam team consisting of Juan Sarte and Jonathan Velasco, plus stylists Kimi and Boop Yap.

If all of this doesn't scream "major Hollywood movie," I don't know what does!