Liza Soberano candidly talked about doing a kissing scene with her boyfriend Enrique Gil.  In the movie Alone/Together, Liza and Enrique give life to Tin and Raf, college sweethearts whose paths will take a different turn that lead them to the biggest regrets of their lives.

When you were starting out years ago, was it difficult to do intimate scenes with Enrique?

Liza recalled, "My first movie with him was Just The Way You Are. It wasn't really intimate...parang kailangang kiligin. Actually, the director said it really worked for me na nahihiya 'cause I was really shy at that time. It worked for it because it made it more nakakakilig."

"It was very awkward. There was a scene in Just The Way You Are where I had to like fall on top of him, which I never really did with any guy in real life. I was like, 'Are you sure na puwede po 'yan?' so it's kind of like yeah, kinda awkward."

How did you two complete the scene?

"It took us a lot of takes because naiilang ako...for our skin to touch...so iniiwasan ko but then the director said, 'No. You are an actress you have to learn to be professional and to be able to do the scene, you have to forget that this is who you are when you're not acting.'"

After several years of working with each other, did you still find it awkward to do a kissing scene with Enrique in Alone/Together?

"It was kinda awkward because we had to do it in a public place with people who are not part of the scene, around us. You'll see when you watch the movie."

Liza explained, "We did something called guerilla shooting. Yeah, that means the camera is just there but there is no setup. We were doing it at the UP Lantern Parade so the people that were there were actually UP students and people watching the parade and they didn't know that it was us 'cause we were in disguise at first. But then we had to take off the disguise and shoot so the people saw us doing the scene. Buti nga walang lumabas na teaser or anything."

"I don't like that 'cause I'm not, I don't really...I'm not the type to do PDA in front of my friends. Hindi ko talaga kaya so when we were there I was kinda scared but Quen is more nervous than I was like even in another scene, he's always more nervous than I am when it comes to those kinds of scenes. I don't know why kahit siya yung mas experienced 'cause he's done kissing scenes before but when it comes to me, he's nervous, he's scared. 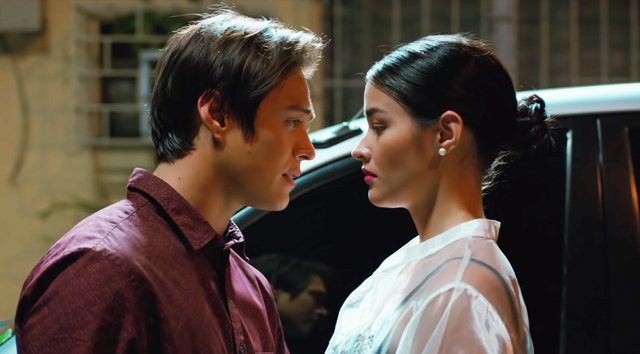 Is it because he is protective of you?

Is it more difficult to do a kissing scene with your boyfriend?

"I think it became harder because of him, because he's afraid na parang it might seem like he's taking advantage or something. Parang that's what he has on his mind, parang I mean, it's not like that 'cause we've known each other for a long time and stuff like that so I think he's just careful. He wants to be respectful pa rin to me and how I would feel siguro."