'Poor guy, he misses you a lot and really wants to see you soon.'
by Jet Hitosis for Pep.ph | Apr 20, 2020
Post a Comment
Featured

It was both a moment of kilig and fangirling for actress Lovi Poe when she woke up to the sweet message of her British boyfriend, Montgomery "Monty" Blencowe.

Kilig? Understandable. Lovi has been having a long-distance relationship with Monty for a while now.

Fangirling? Well, yes, because the sweet message was in the form of a video, and the person speaking in the video was none other than Enrique Arce, Lovi's favorite Money Heist actor.

On Friday, April 17, Lovi posted the video message on Instagram made by the 47-year-old Spanish actor.

Apparently, Enrique filmed the video because Monty had asked him to do it for Lovi!

In the video, Enrique introduced himself as Lovi's favorite character in the popular Netflix series, then proceeded to relay Monty's message to the 31-year-old actress.

"Yeah, that character that you love so much.

"You know why I know that? Monty told me."

Monty is a Los Angeles-based British movie producer and medical scientist whom Lovi has been dating for months now.

Enrique proceeded to say that Monty missed Lovi so much, and wanted to see her much more than Monty wanted to see the fifth season of Money Heist.

"He said that he loves binge-watching the show with you. He's waiting for Season 5 to see it with you also," Enrique added.

She wrote in the caption, addressing Monty: "A MILLION MILES AWAY YET YOU NEVER FAIL TO MAKE ME FEEL KILIG...I MISS YOU TOO." 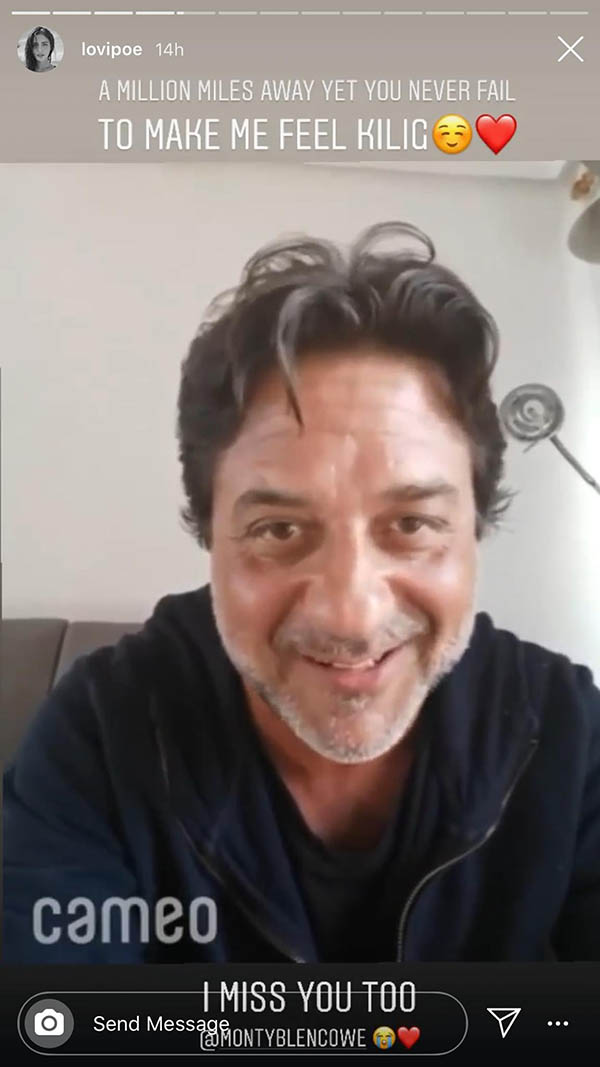 Money Heist revolves around professional thieves who make a profession and a passion out of breaking into key Spanish buildings, including the Royal Mint of Spain.

Enrique plays the character of Arturo "Arturito" Roman, the general director of the Royal Mint of Spain who eventually becomes one of the thieves' hostages.

Season 4 of Money Heist was released on April 3. The expected release of Season 5 is in April 2021.