The Duke and Duchess of Sussex are the talk of the town—but their names probably won't be on Prince William and Kate Middleton's lips when discussing Prince Louis' potential godparents.

Prince Harry and Meghan Markle are most likely not going to be chosen to be Prince Louis' godparents. That might seem weird to those of us who don't know how these things work, but British bookmakers have Meghan's odds at being chosen at 14/1! That's not great, everyone!!

As is tradition, Kate and Wills are expected to bestow the honor on close friends or former staffers. 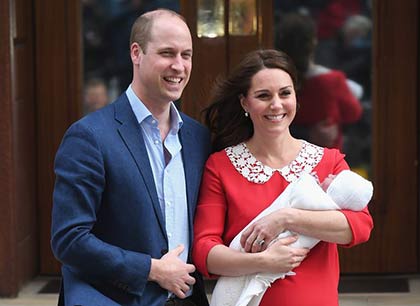 People spoke to Jessica Bridge of British bookmakers Ladbrokes, who said "As with George and Charlotte, [William and Kate] chose close and trusted friends and aides, rather than immediate family members, and the odds suggest that will be the same with little Prince Louis."

The top contenders? William and Harry's former assistant and nanny Tiggy Pettifer, with 2/1 odds, and William's outgoing private secretary and close friend Miguel Head, with 5/4 odds. Also on the shortlist are William's stepsister Laura Lopes (the daughter of Camilla, Duchess of Cornwall), with 3/1 odds, and Kate's former private secretary, Rebecca Priestley, with 4/1 odds.

So there you have it—Meghan probably won't be on any official godparent list soon, but that's fine! She'll always be their aunt, and aunts are the best. No matter what: Prince Louis will be hella loved by many different wonderful people and isn't that what life is all about?!