The 10 Most Heartbreaking Moments In 'Love Actually'

Considering Love Actually is supposed to be a movie about love, it actually contains a whole lot of heartbreak. Well for the humble viewer it does, anyway. We've rounded up the 10 of the most wobbly moments in our favorite festive film, so you can get all the tears out the way and feel relatively emotionally stable when you watch it all the way through.

10. The dragging of the canapés moment

Okay, we don't really associate the character of Colin with actual heartbreak in this film: he ends up having a bloody great time picking up all the honeyz in America. But our heart does break for the poor caterer who has to sit through his unknowing descriptions of her food as "dodgy" and "looking and tasting like a dead baby's finger." Quit while you're ahead, Colin.

9. The Billy Mack being mean to his manager moments 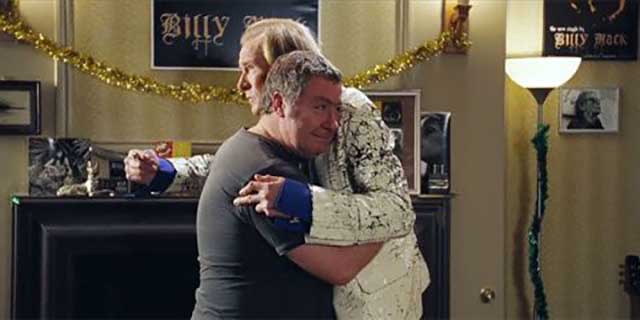 There's lots of these. If he's not calling him the "ugliest man in the world," he's referring to him as his "chubby employee." But the poor guy is only trying to help him get his "festering turd of a record" to number one.

For the love of God, Billy, just be nice, would you?

8. The Daniel breaking down to Karen over some Frosties moment

Poor Daniel's wife has just died and now he's got a pubescent, grieving stepson to contend with. So when he, a fully grown man, gets emotional over a box of kid's cereal to Karen about how he's worried about Sam never coming out of his room, we'd literally give anything to leap through the TV and give him a hug.

It's a good job Karen's there to lighten the mood though, with her wise advice: "No one's ever going to shag you if you cry all the time." She has got a point.

7. The Colin Firth finding out his wife is a cheater moment

We know how it ends. Colin (or Jamie, as his character is actually called, it's just we can't seem to ever see him as anything other than a Colin) ends up finding the "language of love" and falling for a Portuguese woman. Yada yada yada.

But that doesn't make Colin's early scenes in the film any easier to take. As if it wasn't bad enough that his wife was cheating on him, it was with his own BROTHER, who bare-faced lied and said he'd just popped over "to borrow a CD." Borrow a CD my ass, you awful, awful person. Chin up, Colin/Jamie/whatever your name is, the best is yet to come.

6. The "All I Want For Christmas Is You" moment

From the moment young Sam confesses to his step-father that he's in love, we're rooting for him to get his girl. So when the little lady in question, Joanna, belts out Mariah Carey's All I Want For Christmas Is You and points at Sam, our hearts could literally burst. 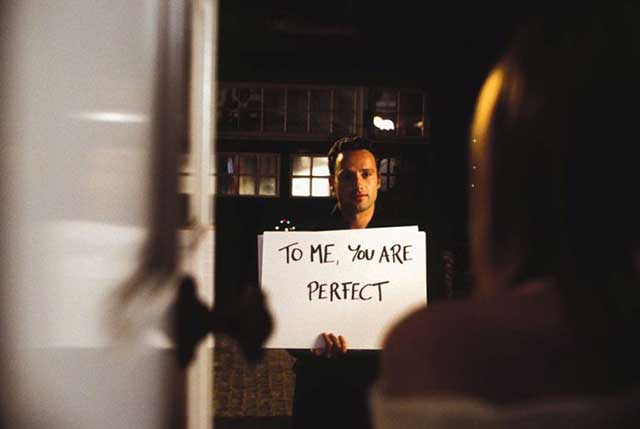 We morally and emotionally disagree with everything Andrew Lincoln and Keira Knightley's characters do in this scene. He shouldn't be confessing his feelings for his friend's wife via the means of cue cards, and she shouldn't be pacifying him by kissing him.

BUT, we kind of can't help but feel sorrow when Mark delivers his final "to me you are perfect" message, does a sad little thumbs up, and then picks up his portable CD player and his cue cards, and goes along his way knowing he's done everything he can. It gets us every time.

A funeral isn't nice at the best of times, but because Love Actually's creator Richard Curtis is a demon for heartbreak, he really makes this one emotional. Liam Neeson's character Daniel makes a speech about his late wife that chokes us up even thinking about it. But then "Bye Bye Baby" by the Bay City Rollers is played as a slideshow of family pictures is displayed and the coffin is carried out, and we fall to pieces.

We won't even go into little Sam's forlorn face and quivering lip as he has to say goodbye to his mother.

And in recent years, this scene has become even sadder with the knowledge that Liam Neeson's actual real life wife Natasha Richardson passed away and he probably had to do a speech a little like this one for real. Why do bad things happen to good people? WHY, GOD, WHY?

3. The brother interrupting the sex moment

Sarah has had the hots for her co-worker Karl for the two years, seven months, three days, one hour and 30 minutes since she first met him. So when the pair finally get together, we're all bursting at the seams with excitement.

Except NO, because morals and sibling responsibility have to storm in and ruin it all when Sarah's brother calls her asking for help. And we're longing, literally yelling at our screens longing, for Sarah to just stay for like 10 MINUTES MORE so she and Karl can seal some kind of deal and make some memories at least. But alas, maybe he was always just meant to be the one that got away. That's rain on my face by the way, not tears, before you ask.

2. The Mark zipping up his coat moment

He may have been nicknamed Creepy Mark in our office but it doesn't mean we don't still feel sorry for the poor guy. Your best friend's wife knows you're in love with her and that you p filmed very up-close footage of her at her own wedding probably for your own private use later. You feel like a bit of a dick.

So the scene where Mark walks off in the realization of what a silly fool he's been would be heart wrenching enough at the best of times. But then the producers had to go and throw Dido's "Here With Me" over the top and we, the viewers, crumple into a teary mess on the floor every time we watch it. Oh come here and give us a hug, Mark.

If there was ever a spine-tinglingly sad moment in the history of film: it's this one. Emma Thompson's character, Karen, spots a brand new necklace in the pocket of her (CHEATING) husband's coat, and is practically overflowing with anticipation to open it so she can feel all aglow with love.

But that's not meant to be, because the bloody bastard has been having it off with his secretary, Mia, all along. The necklace is for Mia, while his devoted wife of several years gets a f*cking Joni Mitchell CD. Honestly.

It's bad enough watching Karen's face drop as she opens the present, but it actually makes my toes curl with devastation when she then tries to put on a happy face for her kids. It's gutting, absolutely gutting. Why do you need to be such an asshole, Harry?