TBH, Nadine Lustre is a force of nature Philippine showbiz never saw coming but actually needed. Instead of transforming herself into the cookie-cutter type of celebrity and role model expected of a young Pinay, she embraced her strong, bold, and fearless personality. Forget pretending to be timid and modest. The 25-year-old actress shows us it’s a waste of time living by someone else’s rules—make your own, and that’s how you find your own voice and identity.

If there’s someone you can take notes from on how to live and love fiercely, Nadine’s your girl. She isn’t afraid to express herself. She lives out loud and is shamelessly herself, online and offline. Below, we ranked the eight moments she reminded us to be our own fierce self.

8. That time she casually posed with a fishbowl

She delivers when she’s handed random objects to pose with. A disco ball? Easy. A balloon? Done. A fishbowl with a live goldfish inside? Why not? Nadine reminds us: Don’t take yourself too seriously. Have fun with your photos and make ‘em yours!

7. When she made a crouch pose look ~easy~

Squats are not for the faint of heart, but Nadine seems to have mastered the pose in her OOTDs. Her glutes may be burning, but her shots are fire. Plus, she makes the pose seem so easy, no matter how uncomfortable it may look—which is something to remember the next time you’re stuck in an uncomfortable situation: Keep your cool and your game face on.

6. When she told a stranger off

It’s good to have a woke queen to look up to, especially one who isn’t afraid to give a stranger a nudge in the right direction. When she witnessed someone carelessly litter in the RORO she was in, she picked up the trash, gave it back to the stranger, and told him to throw it in the trash bin. She’s a living a reminder for you to stand up for what’s right. 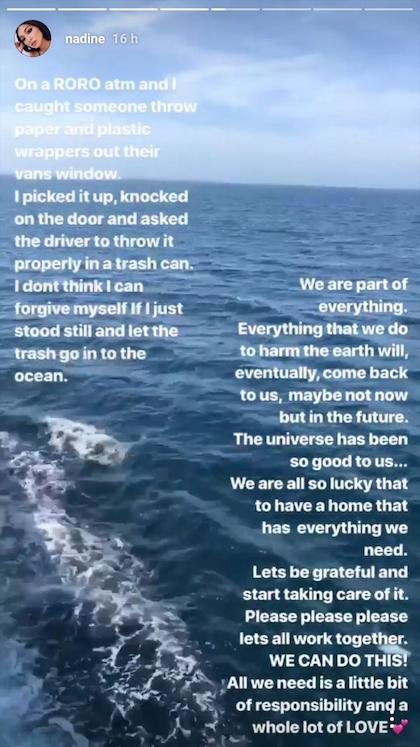 5. That time she set her priorities straight

Nadine proves there’s always time for the important things in life— friends, family, or even the greater good. Despite being busy promoting her film Ulan, she took some time to help raise awareness on the negative effects of plastic on the ocean. She used her influence to spark positive change in the world.

4. That time she poked fun at a rumor about her relationship

Tabloids know how to hype up celeb gossip. Famous personalities usually ignore them or have their PR team handle everything, but Nadine knows what to do when someone misspeaks on her behalf. When a tabloid reported that she and James Reid had a huge fight about a certain “female model,” she took to her IG stories to correct the headline in the wittiest way. Moral of the story? It doesn’t hurt to have a sense of humor when people talk behind your back—especially when the rumors aren’t true! 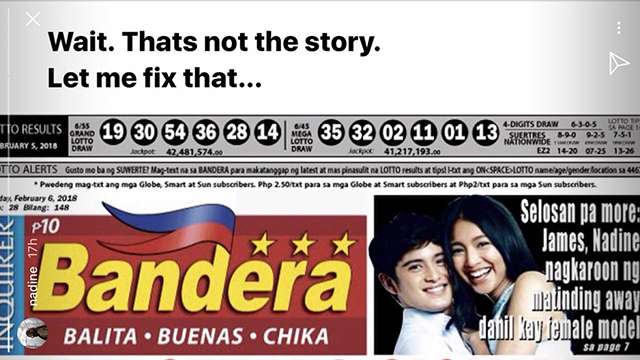 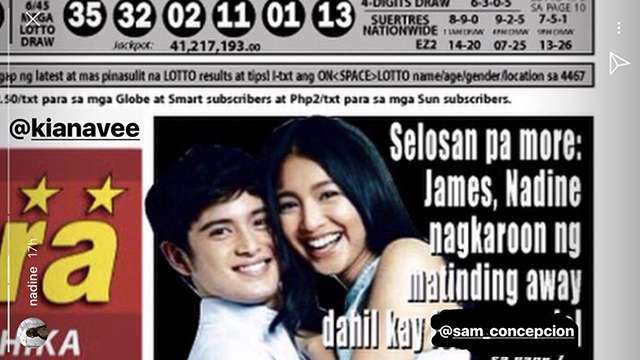 3. When she shut down the archaic stigma about living with your partner

The word was Nadine and James were already living together, which is still considered taboo in conservative Filipino society. Despite not giving a straight answer, and no matter how many times she was grilled with the question, Nadine taught us two things: No matter how famous you are or aren’t, no one has the right to invade your private life; when someone asks you a rather archaic question, stick to Nadine’s iconic Twitter meme, “C’mon, guys, it’s 201_.”

2. That moment she showed she wasn’t here for anyone’s BS.

We all have fake friends who side with us only because they see what they like. They’ll easily switch sides and talk us down as if they weren’t just praising us yesterday. In Nadine’s case, she has fake fans, and she showed them the door in a tastefully made IG story.

1. When she was all about #WomenHelpingWomen

When was asked if she considers herself the sexiest among her young Pinay celeb friends, Nadine said that each of her peers has her own set of assets. Some people may think it’s a safe answer, but a strong and fierce person like Nadine knows better than to encourage the culture of pitting women against each other.

Stan a queen like Nadine Lustre, who goes beyond barriers and stereotypes. In your pursuit of becoming your strongest self, you have to break the mold too. It’s not always easy, but once you do it, feel it—this unstoppable energy inside you. Soon you’ll find that whatever it is that other people can do, you can do too.

Sometimes, it’ll help to remember characters like Nadine: She’s doing her own thing, following her passions, and just being herself—no wonder Mountain Dew, which supports International Women’s Day, handpicked her for its campaign that empowers men and women to chase their own dreams. Whether it’s for herself, a photo, a film, or the planet, Nadine never fails to give her best and move others to do the same.

This article was created by Summit Storylabs in partnership with Mountain Dew.
Shop the items in this story!