Nadine Lustre Is Happy To Be Just Friends With James Reid

1 Nadine Lustre doesn't feel like she has to have a romantic relationship with her onscreen partner James Reid. She says there's already chemistry between her and her On the Wings of Love co-star, so there's no need to be anything more than friends. She even shares that "from the beginning, talagang sinasabi na namin na hindi kami." BUT to all you JaDine hopefuls out there, she does say, "Ang unang foundation naman talaga ng relationship ay friendship, 'di ba?" So that's more important to her right now. (PEP)

2 Jennylyn Mercado doesn't mind dating Sam Milby! There's only one condition, though. He has to be willing to take care of her son, the six-year-old Alex Jazz. "Kasi yun ang sinasabi at nasa isip ko palagi—na pag ako nagmahal, iisipin ko palagi ang anak ko." To this, Sam says he has no problem dating a woman who already has a child. But the actor hasn't exactly said he has intentions of courting her, so Jen's not assuming. Still, she admits to getting really kilig around him: "Hindi ba halata? Dyusko, pinagpawisan nga ako kanina habang katabi ko siya!" BTW, you might want to catch their movie The Prenup, which shows today! (PEP)

3 Regine Velasquez is defending Lea Salonga's "kababawan" tweet, which many AlDub fans took to be about the AlDub craze. She says "Maybe she chose the wrong word... Kasi kung titingnan mo, mababaw naman talaga. If you'll compare it to politics and kahirapan ng buhay, talaga namang pampasaya lang." She refuses to say anything more about the issue, since she herself doesn't really know for sure what the tweet was about. (PEP)

4 If you want to learn a whole lot more about how to make it big financially and read up on the people who've made it big, grab a copy of Forbes Philippines' October issue. On the cover is Carlos Chan, the Filipino behind the food brand that’s popular all over Asia, Oishi! 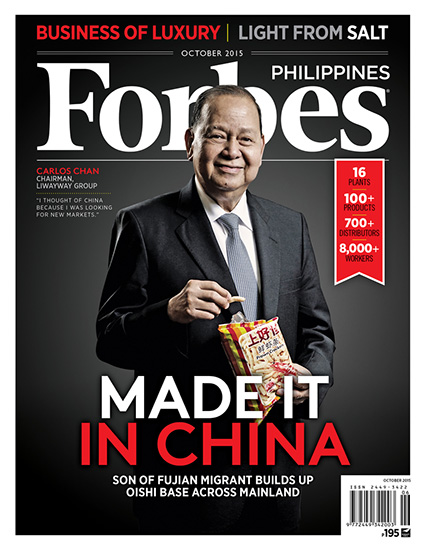 5 Love traveling and staying connected? You can now enjoy worry-free data roaming in 110 countries with Smart Surf Abroad 550. You just have to turn on your mobile data setting, then you can enjoy posting your photos on your social media accounts and navigating a city via Google Maps for just P550! For more details, visit smart.com.ph/postpaidsurfabroad.