Not To Alarm You, But Nicki Minaj Just Tweeted That She Is Retiring + Wants To Start A Family

I’ve got good news and bad news. The bad is that it still sounds like Nicki’s retirement tweet is no joke. But the good is that Nicki promised to talk through it all on her Queen Radio show and apologized for the abruptness of that first tweet.

After a devastated fan reached out to her, Nicki tweeted, “I’m still right here. Still madly in love with you guys & you know that. In hindsight, this should’ve been a Queen Radio discussion & it will be. I promise [you] guys will be happy. No guests, just us talking about everything. The tweet was abrupt & insensitive, I apologize, babe.”

And she promised she’d clear things up for any other shaken Barbz out there.

Nicki Minaj just sent everyone into a mass panic a few minutes ago when she tweeted that she is officially retired. Like, she’s done with music! No more rapping! No more supplying her fans with perfect Instagram captions, like “He see me lookin’ pretty every time he scroll up.” No more music videos with Megan Thee Stallion! This is big news if it’s true, and it’s truly devastating if you’re a Barb.

Here’s what we know so far: On September 5, 2019, Nicki wrote in an already deleted tweet, “I’ve decided to retire & have my family. I know you guys are happy now. To my fans, keep reppin' me, do it 'til da death of me, [X emoji] in the box—cuz ain’t nobody checkin' me. Love you for LIFE.” There were also a ton of other emojis in there. 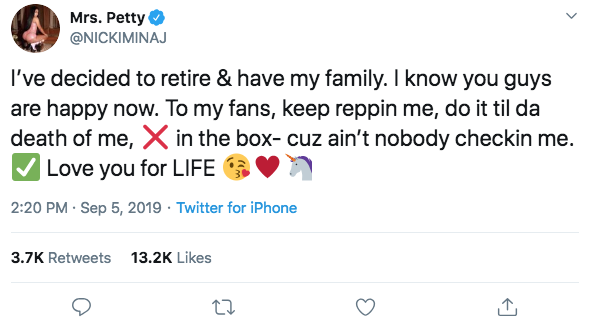 There’s no telling what she meant when she tweeted, “I know you guys are happy now,” but hopefully she’s not letting the trolls get to her.

As for the “family” bit, Nicki hasn’t announced that she’s expecting a baby or anything, so she could just be talking about getting married to partner Kenneth Petty. Earlier in August, she went on Queen Radio and said she and Kenneth recently renewed their marriage license, so they have a couple of months to finalize it.

But here’s something interesting: When she was talking on Queen Radio, she also told listeners she’s going to have a big wedding later because she’s working on a new album. Hmmm. Maybe we’ll get an album before she calls it quits for good? Lots to ponder here.