There's no denying the charms and magnetic pull of actor, model, podcaster, and LGBTQIA+ advocate Nico Tortorella. Nico currently stars as Josh in the quirky comedy series Younger alongside Sutton Foster and Hilary Duff, has come out as gender-fluid, recently married their partner of about 13 years Bethany Meyers, and now adds poet/author to their (Nico's preferred pronouns are they/them) laundry list of achievements.

In time for the Manila International Book Fair, National Book Store flew Nico in as part of their tour for their debut poetry collection All of It Is You. and we got to sit down and talk to them about confidence, love, addiction, gender politics, and sexuality. 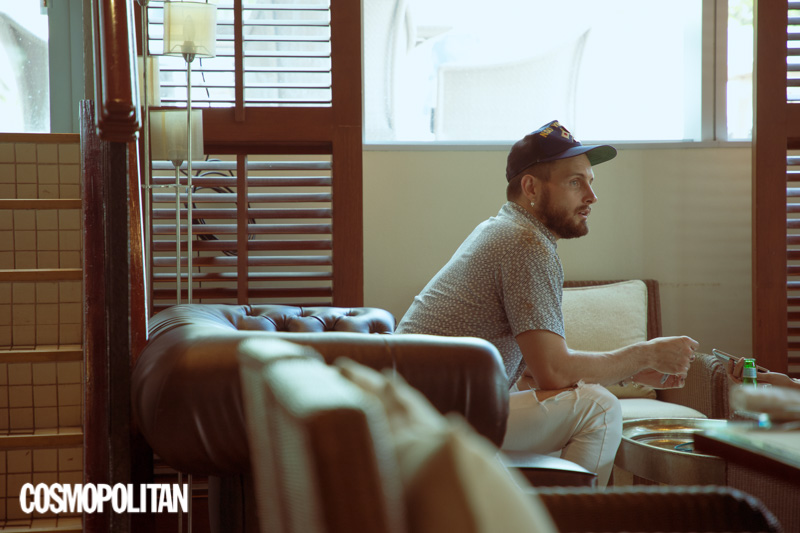 What has life been like living as a gender-fluid person?

The struggle is real, then.

Definitely! We all do struggle. I'm not a saint, yet. (laughs) I'm working on it. But I think that in this life's iteration, if I wasn't struggling, I wouldn't be doing what I'm supposed to be doing. And I think the struggle teaches us all how to get where we're supposed to go. And I deal with a lot of shit on a daily basis—family stuff, Hollywood stuff, relationship stuff. I'm not perfect. I don't wanna be. That sounds miserable.

[I also struggle with feeling] like the work [of pushing for gender and sexuality education] sometimes isn't worth it. I have these moments of humility. Like, "What is it all really for?" And then I'm reminded through a DM from a kid in Dubai or Saudi Arabia or you know, Bumblef*ck Canada or whatever, that they stopped cutting themselves today because they heard something that I said or they came out to their parents today because they heard the podcast.

How did you come to the realization that you were in fact, gender-fluid?

I've always lived as a gender-fluid person but I just haven't been able to express it with the language. I think once I started doing the work on the queer community at large, I started to understand what gender is on a much wider scope [from] what we've been taught. And then maybe it's not what we've been taught. And maybe there's so much more to it than what we even imagine. And for me, if gender doesn't exist in the same way that we think it does, then sexuality doesn't mean anything at all and it's a really interesting spiral that I'm in right now. 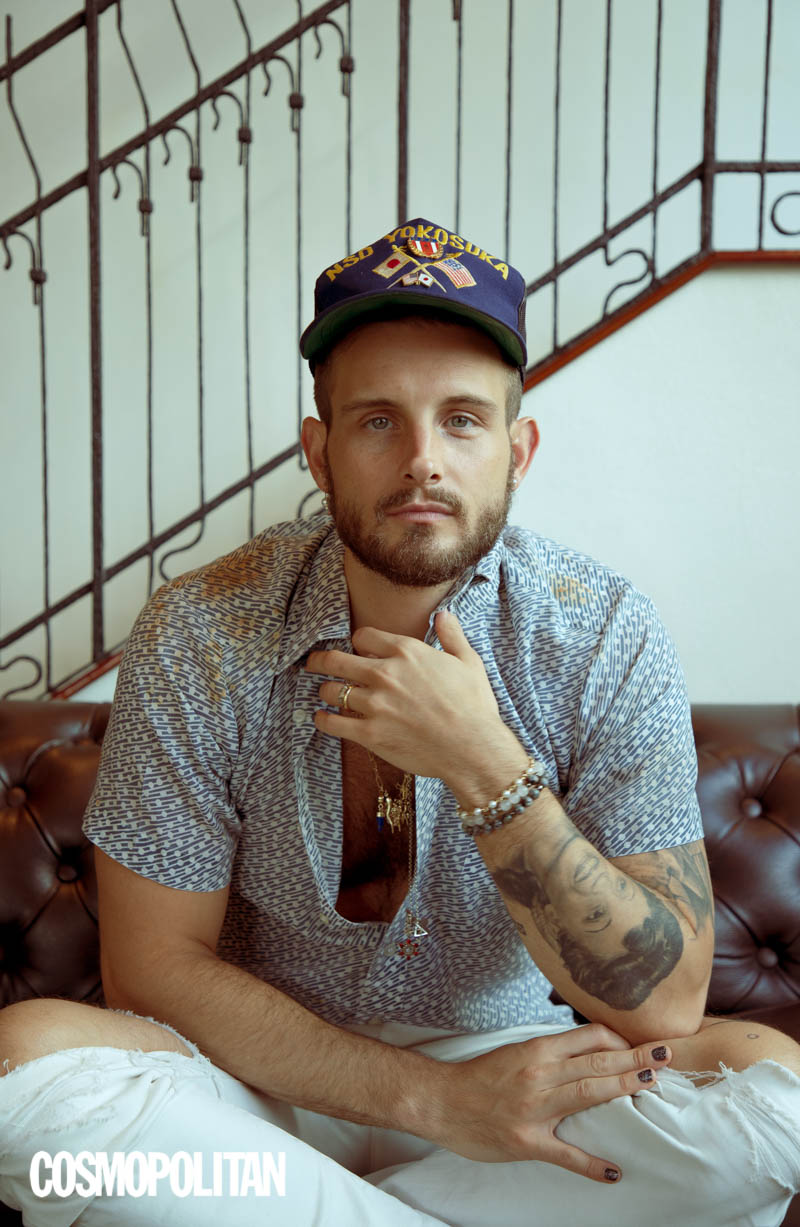 It took me some time to find my own pocket. Even still, the way that we define [ourselves]—the language is ever-expanding and I have always felt like I wasn't one or the other because I didn't even know what one or the other meant. I think that what I'm more interested in is the masculine and feminine, rather than the man and the woman. I think that gender and energy is way more interesting than what we have between our legs—than our sex. Because I know plenty of women that have penises and plenty of men who have vaginas and they're some of the most incredible people I know.

How has your realization of your gender-fluidity affected your life?

The work I was doing within the queer community helped me realize my most authentic self. Trying to break down sexuality led me to gender and once I started the gender spiral, it was like, "Wait a second. It's deeply spiritual too."

I think there's like an intrinsic symbiotic relationship between sexuality, gender identity, expression, and spirituality and God. If you're doing the work on yourself at a young age—if you're looking in the mirror and you're actually looking at yourself and going, "Okay, this is who I am, this is who I like, this is what I feel like on the inside" though it goes against what we're taught, you're doing the work. You're looking at yourself. If that's not spirituality, I don't know what is. It's next level consciousness. 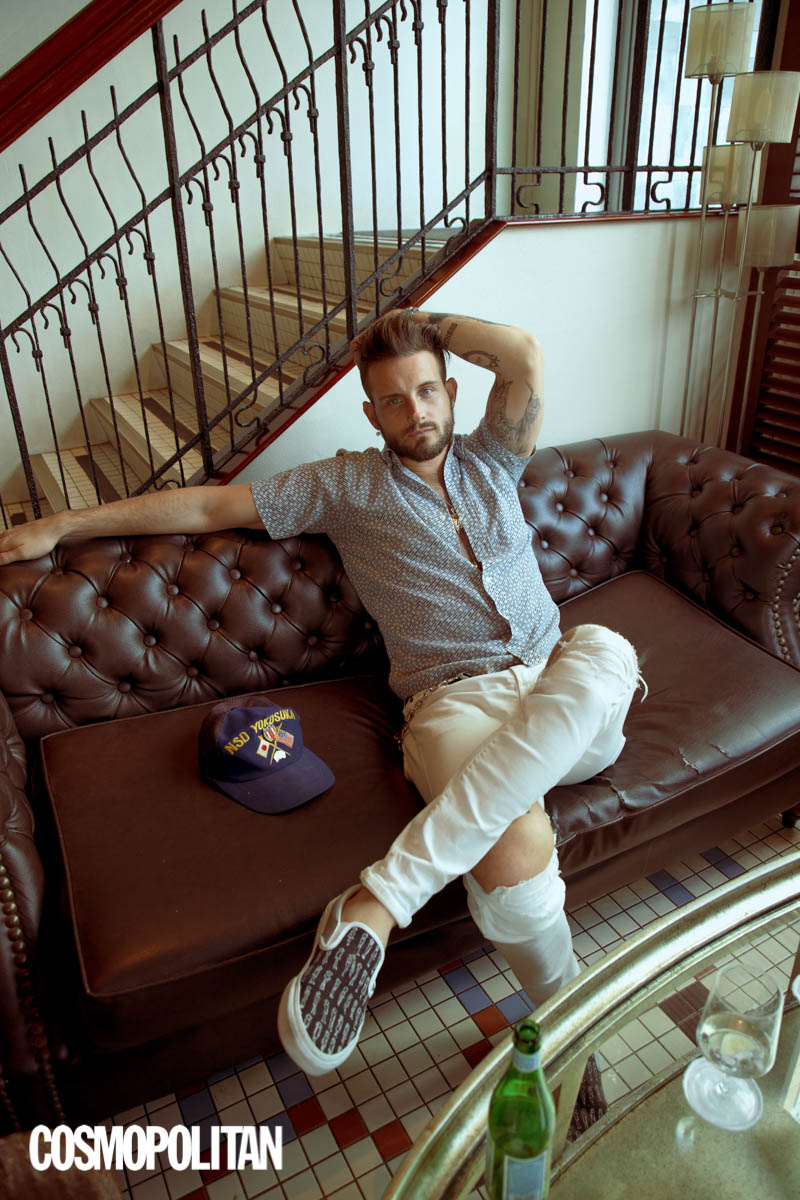 How has it shaped your career choices?

Well, my career is changing. I'm no longer driven by the opportunity to play make-believe on television. At one point, that was the driving force, ‘I wanna be an actor for the rest of my life!’ And I will be. I will always be working on some sort of scripted material, but I guess the intention has shifted.

I'm a lot pickier with projects. They need to go in line with the messaging. I'm not gonna play a character that I don't resonate with or that is problematic to the cause. I am way more interested right now in my own personal work—the writing, the unscripted, the self-actualization, the global education; the touring right now and just sitting down with people and understanding who they are and where they come from.

So what got you to come out with All of It Is You.?

My podcast "The Love Bomb" really inspired this book. You know how in tarot, when you pull the Death Card, it's like, something has to die in order for another to be reborn? That's what happened with this. I was writing a bunch of poetry for the podcast and when I decided to stop recording episodes for that and the podcast died, these books kinda just showed up in my life.

Two books: "All of It Is You." and I'm currently still writing the second one. It's a non-fiction book. It's a big one. It's a narrative-memoir hybrid of sorts.

What has it been like being in a queer polyamorous relationship?

It's been really great! It's been really multidimensional and dynamic. There have been some days that haven't been easy, and my partner and I, Bethany, have been together going on 13 years now in one way or another, so we know each other. We're best friends, but we hadn't lived together in six years. We just moved in with each other after we got married so it was a change of family dynamics—sharing space. It's led to some struggles, but we are working our way through it.

We have everything that we've ever wanted and we have this incredible relationship that is growing and is based in trust and communication.

Also, we both just started dating other people literally the same night! Like, Bethany went on a date and I stayed out of the house and we met up with people we had already been talking to on a regular basis. It's so beautiful. We have everything that we've ever wanted and we have this incredible relationship that is growing and is based in trust and communication. And we're doing some real honest work outside of ourselves for a much larger cause and we get to come together and share that celebration with each other.

[Compared to my previous more 'traditional' relationships], it's just so much more layered. It's not fear-based. It's not restrictive and Bethany and I are both on the same plane—the same wavelength. It's just so beautiful. We're so lucky. 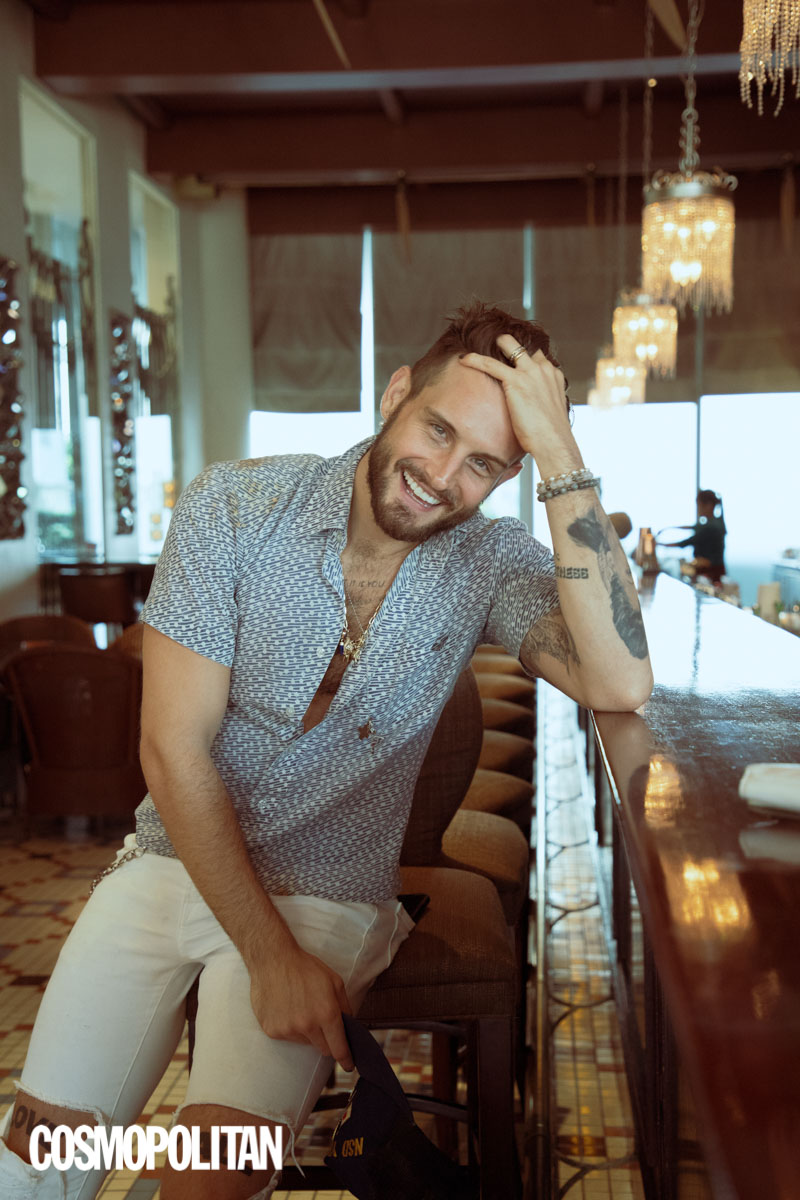 Could you walk us through how you’re able to make polyamory work?

You know, Bethany just posted this whole thing on Instagram all about it this afternoon:

Given the complexity of your gender identity and expression and views on sexuality, what makes somebody attractive to you?

I think it's just confidence. I'm most attracted to somebody that is just unapologetically themselves and just stands by it. And that can look like a million different things. That's not a gender, that's not a sexuality, that's just somebody who owns who they are and what they do. There are gray areas in everything. And I think that I'm very attracted by somebody that recognizes the gray areas in everything—the simultaneity of everyone and everything, too. 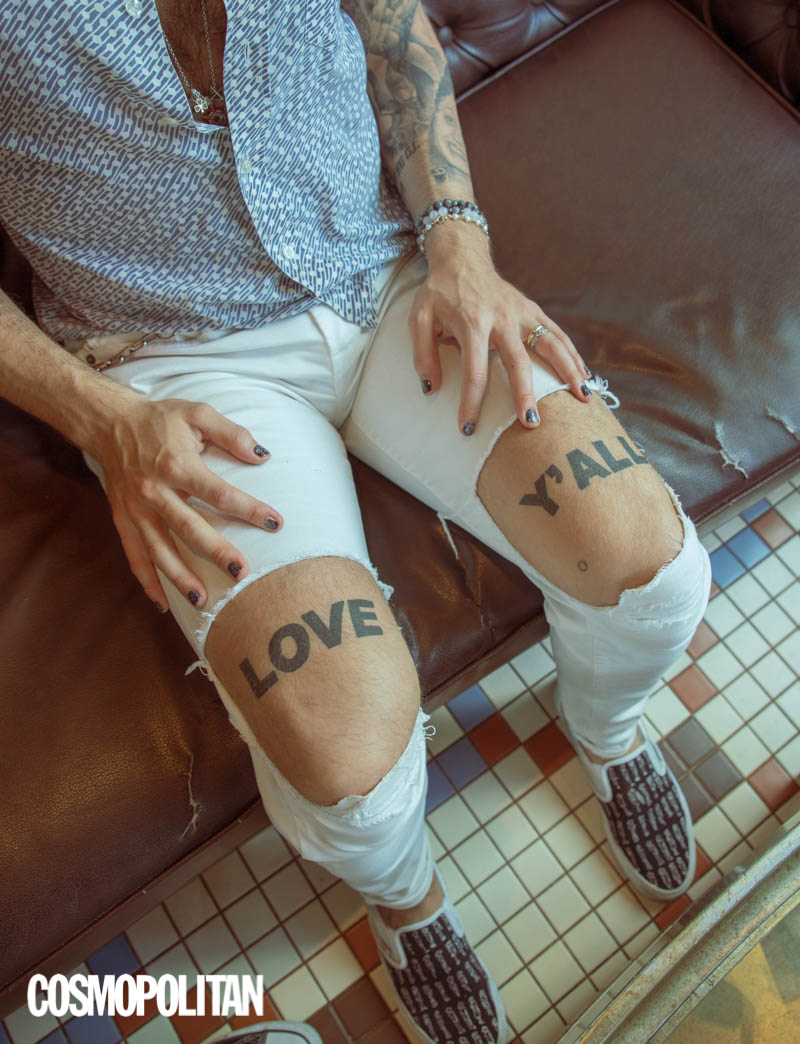 You've mentioned addiction in your Instagram posts and in your poems as well, can you talk about that for a bit?

Yeah, I'm almost four years sober from alcohol. I come from a long line of addicts and it is something that never really goes away. It just changes and it's something that isn't really talked about, especially in the queer community. The first place that we go to find each other is at the bar or the club and so many people get lost there. Especially if you're dealing with really heavy identity and expression ideas, it can get really troublesome really fast, but there's a way out. There is no lack of inspiration. It's everywhere.

For me, I was just in a lot of pain. It stems from all of the above, really—family, identity, expression, work. They all just compounded. I was just like, hurting myself—I was hiding. I was numbing the pain before I knew how to heal it. Once I got sober, [part of understanding myself and my alcoholism] is the realization that, all of it is you.

The opportunities that have been opening for me have been so bountiful and I found my own version of God writing this book. And now I get to share them with the people and that's the driving force—my marriage, my new friends that I've found because of the work that I do, and the people. This is really about the people. Helping people cope. About loving people that desperately need to be loved. 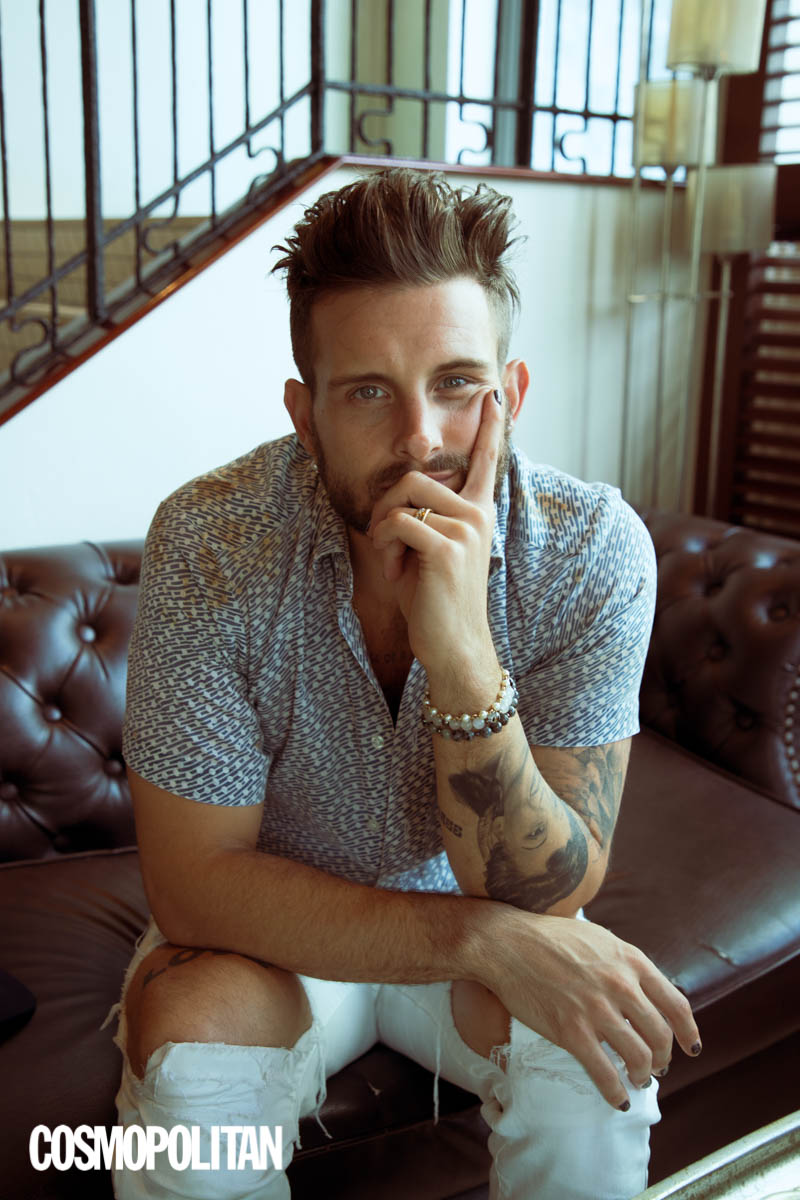 As a final word, do you have a message for people who are currently struggling?