OMG! Are Jennylyn Mercado And John Lloyd Cruz Doing A Movie Together? 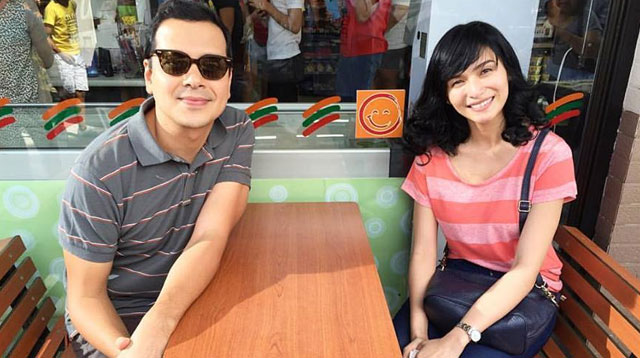 1 It’s happening! According to PEP.ph, Jennylyn Mercado will be starring with John Lloyd Cruz in an upcoming romantic-comedy movie produced by Star Cinema. Reports also say that the film will be directed by Cathy Garcia-Molina! The actress posted this photo with JLC on her official Facebook page. We honestly can’t wait for this one! Our two favorite rom-com actors in ONE film?! OMG! (PEP)

2 It seems like Geoff Eigenmann is dating again! The former Cosmo Centerfold hinted about his new relationship on Instagram, posting a photo of two wine glasses with a mysterious girl in the background. The photo was simply captioned, “day 1.” Although people initially thought it was his co-star Max Collins, it looks like it’s actually new singer Maya, who posted a similar photo with the same caption. (PEP)

3 Gigi Hadid looks smokin’ hot on the covers of Vogue Paris. The magazine’s March issue will feature two covers of the supermodel—one with Gigi in an embellished jacket and one with...well, one with her naked. SLAY, GIRL!

4 Entrepreneur and hairstylist Ricky Reyes was found guilty of discrimination against former employee Renato Nocos. According to reports, after finding out that Nocos was HIV-positive, he was transferred to a branch that was already on the brink of closing down. Then once the salon had formally shut down, Nocos was not given any new assignment. The National Labor Relations Commision ordered the Ricky Reyes Corporation to let Nocos return to his job and pay back his wages, benefits, and attorney’s fees that have amounted to over P600,000. (PEP)

5 Is this Georgina Wilson’s new love? Over the long weekend, the model-host posted a photo of her with an unknown man on Instagram while she was vacationing in Boracay with her sister Jessica and some friends. Is he the one, George? We’re dying to know!