Did Perrie Edwards Change This Little Mix Lyric To Make A Subtle Dig At Gigi Hadid?

Some fans think she threw some shade during 'Shout Out To My Ex.'
by Dusty Baxter-Wright | Aug 1, 2017
Post a Comment
Featured

This is awkward. Some Little Mix fans are claiming it's not just Perrie Edwards' ex getting a shout out but his new girlfriend too, after alleging that the singer changed lyrics at a recent gig to dig at Zayn Malik and Gigi Hadid.

Considering Perrie and Zayn split in August 2015 and she's been dating mega babe Alex Oxlade-Chamberlain since January 2017, we're dubious—but some fans say they heard a bit of subtle shade. 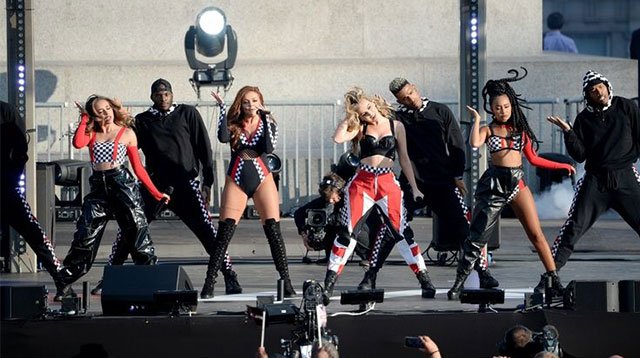 So back in October 2016, speculation that Little Mix's single "Shout Out To My Ex" was about Zayn went into overdrive due to certain lyrics referencing his tattoos and the four year relationship he shared with Perrie.

But it's a different scathing lyric about his sex life that fans are reporting Perrie changed during a concert in New Zealand over the weekend.

Listen to the moment below:

"Hope she aint faking it like HADID"
- Perrie Edwards

Referencing the way Perrie and Jade Thirlwall laugh after the alleged lyric change, one Instagram user wrote: "She said the word 'Hadid.' Her voice didn't crack. Cause when she said it she started laughing with the other Little Mix members! Like dude it's been years, GET OVER IT!"

Another added: "You're clearly not over your ex, why change the lyric to "hope she aint faking it like Hadid"?" [sic.]

Of course, some fans have been quick to jump to Perrie's defence, too, sharing the opinion that the girls were only laughing because her voice cracked, and that they weren't being shady at all.

"Lmao why are you all hating on Perrie?" a third Instagrammer wrote. "She didn't even say 'Hadid,' she had a voice crack and Jade started laughing. Honestly stop spreading rumors and causing drama because it's honestly so childish, just leave [sic]."

Either way, we'll be listening to the clip on repeat all afternoon trying to work out what she said. How about you?