Guess What Pia Wurtzbach And Dr. Mike Did On Their Latest Date! 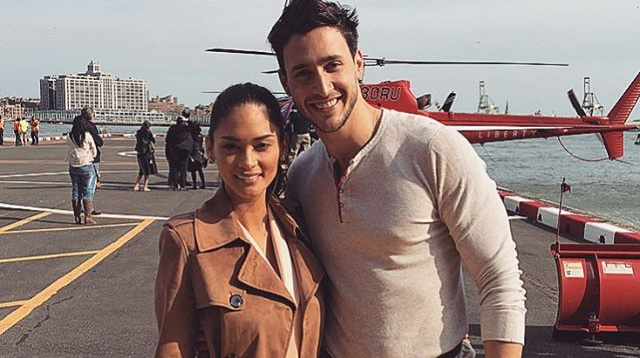 1 Did Pia Wurtzbach and Dr. Mike Varshavski just set the bar for the best date ever or what?! Dr. Mike gave fans a peek of their latest date—and it involved a helicopter tour around New York City and some delicious Filipino food! First, he shared this photo with Pia, along with the caption, “Yesterday, helicoptering around #nyc #staycation.” Naks!

He also Snapchatted their helicopter ride:

Pia and Dr. Mike obviously worked up an appetite post-tour, because they went for Pinoy grub soon after. Pancit and lumpia FTW!

Of course, a legit Filipino meal isn’t complete without some ice-cold beer to wash everything down. San Mig Light or Red Horse—which one will it be, Dr. Mike? (Push)

2 Daniel Padilla, who turned 21 on April 26, just had a birthday he won’t forget, after friends and family threw him a surprise party. Here’s Daniel arriving at the scene with Kathryn Bernardo:

Posing with his huge sports and music-themed cake:

And smiling for a photo op with Kathryn and her mom, Min. Happy birthday, DJ!

3 Who’s excited for the Encantadia reboot? We definitely are, especially after seeing this photo Dingdong Dantes shared on Instagram! The actor will be taking on the special role of Raquim, who was portrayed by Richard Gomez in the original 2005 series. Can July just come around already?

4 When you’re BFFs with Taylor Swift, expect to have a lot of baked goodies made just for you! Taylor did just that for Gigi Hadid, when she surprised the supermodel with a cake on her 21st birthday on April 23. Let’s not miss the fact that Taylor unveiled her masterpiece presumably thousands of miles in the air, on a private jet. Life is sweet!

5 Here’s a Leonardo DiCaprio update you wouldn’t want to miss! Leo, who is the United Nations Messenger of Peace, just took an epic selfie to encourage people to support the fight against climate change. We didn’t think it was possible to love him more, but there you go. (Cosmopolitan)

.@LeoDiCaprio takes his UN Messenger of Peace duties seriously! Thanks for the #ParisAgreement support! pic.twitter.com/MXKmVxpTL8