John Paul Cledera and his sister Nicole Anne got the surprise of their lives, all thanks to a cake. The siblings baked a cake inspired by Taylor Swift's latest album Folklore, which was released on July 24, 2020.

John Paul, or "Jp" to his friends, took to Twitter and posted photos of the cake shortly after "Cardigan," the album's lead single, debuted at the top spot of Billboard Hot 100 on August 4 (Philippine time).

Jp wrote in his tweet, "I made @taylorswift13 a cake to celebrate the success of #Folklore and #Cardigan. I literally painted this using frosting for almost two hours. @taylornation13"

The international singing sensation took notice of their home-baked creation and replied to Jp's tweet.

Taylor took things a step further by revealing she had visited Jp's Instagram account and was amazed by the artwork posted there.

"WOW, this is incredible!! Thank you so much for making this. I also saw your Instagram and your art is phenomenal!" Taylor tweeted.

PEP.ph had a quick chat with Jp on August 4 via Instagram Direct Message.

The 24-year-old freelance artist revealed that he has been a Swiftie—a term used to identify Taylor Swift's fans—since he was a teenager.

He enjoys sketching and painting portraits of Taylor Swift during his free time and makes sure to tag her each time he uploads them on Instagram.

"I have been a fan of Taylor Swift since my high school days. I started creating artworks of her when I started becoming a fan of her music. I would practice drawing her while listening to her songs," Jp said.

The Folklore-themed cake not only gave him and his 17-year-old sister the best "fan moment" by far, but it also allowed them to showcase their talents.

"We decided to make a cake because my sister bakes a lot and I love to create artworks, so we had the idea to put the two together," Jp explained.

Jp spent two hours painting Taylor Swift's likeness on the cake's surface, and it took them six hours to finish the cake. 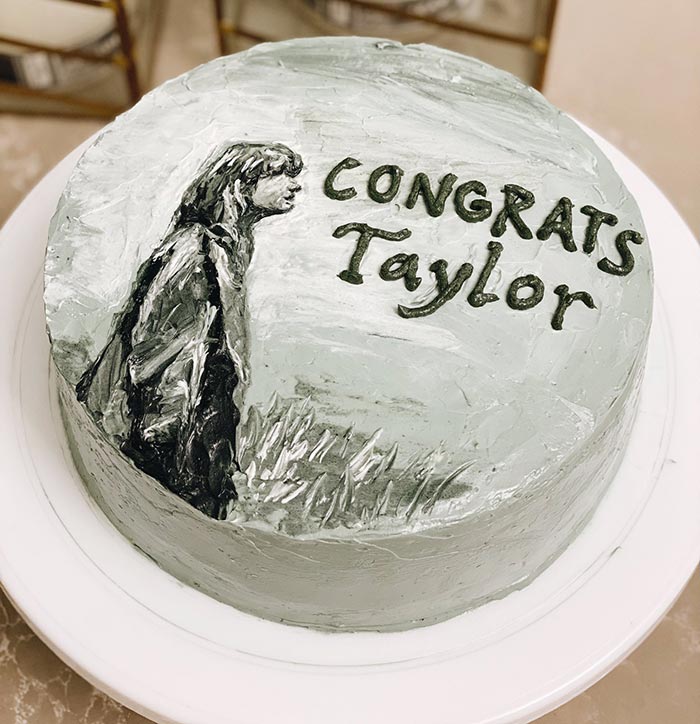 He continued, "We baked it before her song topped the chart so that I could post it right away after they release the chart results. We also had a strong feeling that she was going to get that number one spot."

Jp was on a video call with his "Swiftie friend" when the results were posted past 1 a.m. on August 4.

He remembered "freaking out about Taylor going number one."

The thrill intensified when Jp woke up later that day with the news that Taylor replied to his tweet.

"I just woke up from my sleep and everyone was calling me, telling me to look at my Twitter account. I was literally in shock and I couldn't believe it," Jp told PEP.ph.

"I screamed then immediately went to my sister's room to tell her that the cake got noticed by Taylor. Tapos we were both screaming and jumping. We were freaking out for God knows how long hahaha!"

Jp went on to share his takeaway from his surreal experience: "I think that if you put a lot of heart and effort in what you do, you will get the recognition that you deserve without trying too hard."

You can order Jp and Nicole's Folklore cake for P1,000 on Baddie Bakes PH on Instagram and Facebook.