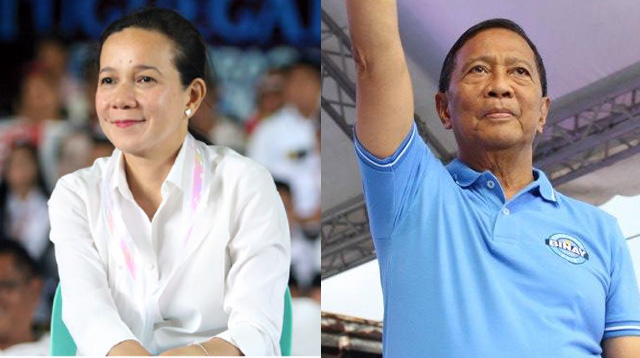 Senator Grace Poe and Vice President Jejomar Binay were statistically tied to take the top spot in the latest presidential survey conducted by Pulse Asia from February 15 to 20.

In a news release, Pulse Asia announced that Poe got a 26 percent rating while Binay was just a hair’s breadth behind with 25 percent.

Senator Miriam Defensor-Santiago was the lone candidate lagging behind with a mere 3 percent of respondents backing her presidential bid.

A breakdown of the candidates’ ratings from geographical areas showed that Binay was highly favored in Metro Manila with 33 percent.

Poe for her part received a 33 percent backing from Luzon despite her citizenship woes, while Roxas got the Visayas nod with 35 percent.

The tough-talking Duterte, who hails from Mindanao, enjoyed a 45 percent rating in the said area.

Escudero is statistically tied at the top of the race with Santiago’s partner, Senator Bongbong Marcos Jr., who got 26 percent.

The latest Pulse Asia survey conducted from the period of February 15 to 20 was based on a nationwide sample size of 1,800 registered voters with a ± 2% margin of error.

Meanwhile, the 2016 Presidential Elections has officially taken over social media. The official Twitter account of the Commission on Elections (COMELEC) released special hashtags for each presidential candidate, along with personalized emojis.