The teen heartthrob sat down with Cosmo and talked about his career, girls, crushes, and more. We can't wait 'til this cutie becomes a Cosmo Hunk!
by Jing Lejano | Feb 16, 2011
Post a Comment
Featured 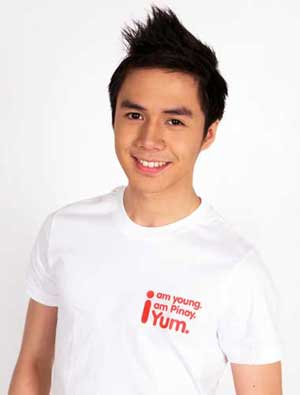 Theater and TV cutie Sam Concepcion is definitely a Cosmo Hunk in the making. At such a young age, he's already been making girls his age (and even older) swoon, left and right. So, we couldn't wait until he's ready to join our hot list of men--we just have to get to know him better for you NOW.

Sam discovered his love for theater when he was 8. Eventually he was able to break into the mainstream music scene and on television, making many a teenage heart fall head over heels in love with his boyish charm and enchanting voice.

Sam inspires more young people by taking on admirable roles outside showbiz, such as being Youth Ambassador for Education and the Arts in the Third District of Manila in 2005, youth role model and spokesperson for the Department of Education, official spokesperson for the Philippines of the Business Software Alliance’s B4USurf Campaign, and Ambassador for Children of World Vision, an organization that helps send indigent kids to school. He was also given the prestigious UNAP Outstanding Youth Leader by the United Nations Youth Association of the Philippines.

Recently, Sam was chosen to be one of Jollibee's Yumbassadors, the popular food chain's roster of young role models. Cosmo had the chance to sit down with him for brunch, so we asked him questions about his skyrocketing career (he's slated to be Taylor Swift's front act on her February 19 concert!). In time for the love month, we threw in questions about his celeb crushes and his views on love and dating.

Don't forget to launch the gallery to check out photos from the Yumbassadors press conference and the press preview of his upcoming performance in Repertory Philippines' Peter Pan, where he plays the lead role.

What expectations do you have about your career?

I’m not in a rush for anything. [I'm] really just living it one day at a time, learning from each achievement. I really, really have been blessed and I’m really thankful for everything that is happening to me. Like what I always say, everything happens at the right time, in God’s right time. And I know that everything will work out, however it is, what’s best for me in the right time, so it’s really making the most of today, what I’m experiencing right now, and leaving it all up to God. He’s basically very [particular about] what’s gonna happen to me, to my future and all. I’m not in a rush for anything naman, and I’ve been really thankful and blessed just to be able to perform on stage and to share what I’ve been given.

Have you ever considered breaking into the international scene?

We don’t know for sure if it will [happen], but if it does, that would be great. I’ll cross the bridge when I get there because I really don’t know what’s in store. Okay, siguro hindi pa (laughs). Yeah maybe, if you think of the big picture, or like if you’re asking me to dream, ideally dream, I’d say Hollywood. If you’re an artist in music and you’re there and you’re a Hollywood artist, [it means] you have the talent.

Are you willing to cross over to Hollywood?

Yeah, if given a chance, then I will, if saying that it’s the biggest dream that I can dream of. But thinking of the limitations, I’m taking it one step at a time, maybe Asia first.

Would you like to do, for example, what Christian Bautista did when he crossed over to Malaysia?

Yeah, yeah. That is a huge step, being able to make a mark in other countries with your music. That is huge. That is the kind of huge that is attainable, that I can reach.

Name a celebrity or an artist you'd like to work with.

Did you make any plans for Valentine's Day?

No. I don’t [have] enough time for it kasi I’m just preoccupied with a lot things. [I'm] not in a rush, I’m taking my time as well. I'm just waiting for it to happen.

Tell us, what's your type when it comes to girls?

Maybe I don’t have a type, but I don’t really know, maybe someday I’ll have [one]. But personality-wise, of course I like someone who is easy to be with, fun. [Talent in] singing and dancing is a plus. Nothing in particular, [just] someone who is good company and is a best friend. I don’t know my type. [I prefer girls who are] sexy but she doesn’t know she’s sexy.

Describe your ideal girl in one word.

But you’re open to it?

I guess yeah, maybe, it can happen. I’m not really sure about it. (Laughs.)

What part of a woman’s body do you notice first?

Eyes. Pretty eyes are nice...or the way she looks at you.

How about the part of a woman’s body that you want to touch?

Her hand (laughs.) I’m trying to be safe. Or butt.

Have you ever been in love?

How do you know you're in love?

When I don’t know. Makes sense, right? [You don't say] "Oh my God, I love this girl!" [It's when you find yourself thinking] "Why do I think about her a lot? I don’t know, what is this feeling?" That kind of drama.

Have your ever felt that way?

Of course. I’m a teenager, so we experience that a lot. (Laughs) I don’t know if it’s real.

How do you deal with heartbreak?

The breaking out into tears? I don’t know, I just move on. I’m still young.

Click the 'view gallery' button to see photos of Sam.