The country singer with a boy-next-door charm and a sexy deep voice bags the coveted Idol crown in the talent search's finals.
by Dawn Niekamp | May 26, 2011
Post a Comment
Featured 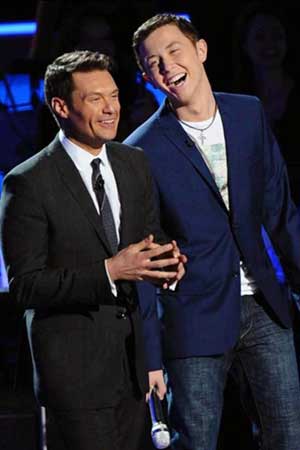 If snuggling up on the couch twice a week to catch American Idol has become a ritual, you'll know that Season 10 was one for the books. Filled with the drama of new judges, controversial eliminations, and a vocally charged cast (complete with heartthrobs and the occasional heartaches), it's been one heck of a ride. But, a hot 17-year-old's amazingly deep voice won over everything--the hearts of the judges, Americans, and ladies the world over: Scotty McCreery was named this year's American Idol!

When Season 10 first aired in January, we all knew we were in for a good show--and, even if he isn't your bet, you've got to admit that Scotty was "in it to win it," to quote 10-year AI judge Randy Jackson. Superstars Jennifer Lopez and Steven Tyler joined him this year at the judges' table, decoding each heart-stopping performance, offering good advice to all finalists, and making this season one of the most interesting ever. (Let's not forget hot host Ryan Seacrest, of course!)

Scotty had some serious competition this season, led by runner-up Lauren Alaina. There were Filipinos among the 24 semifinalists, too: Clint Jun Gamboa and Thia Megia. We also tuned in faithfully to see (and swoon over) the likes of Stefano Langone, Jacob Lusk, James Durbin, Paul McDonald, and Casey Abrams. Fun, fearless femmes among the finalists were pretty Pia Toscano and the idol who came so close to making it to the final two, Haley Reinhart.

If you're updated on Idol, you'll know that this season was mad about country music since the beginning. It's really no surprise that the young and ever-so-charming Scotty was declared the winner. But, if there's one thing you sure didn't expect, it's that this heart-melting voice belonged to a dreamy teenager. Many fans worried that his age would be his downfall, but boy, did he prove them wrong. Unlike Pia or Jacob who could hit those ceiling-high notes, Scotty owned the stage and won our hearts with his smooth bass voice.

Week by week, as more adored idols left the show, Scotty stepped up and proved to us that he could overcome his personal barriers. He took hard criticism from the judges and followed tips from celebrity guests. Soon enough, the Scotty we grew to love had taken the competition by the horns.

Scotty rarely had any problem with song choices, but when he had to move out of his country comfort zone, he took us all by surprise with his suave swagger and alluring voice. We even witnessed some "tender moments" (as JLo would call them) that gave his performances a personal quality, touching our hearts. We're looking forward to seeing what this cute new musician will be up to next!

The Top 11 will soon embark on their summer tour. Watch for Season 11 soon! Be sure to watch Season 10 all over again on Star World, which is available on Sky Ch48, Cable Link Ch35, Dream Ch36, Cignal Ch40, and over 275 cable operators nationwide.