1 Do you wanna be on top? America’s Next Top Model host and former supermodel Tyra Banks gave Pinay stars Georgina Wilson, Anne Curtis, Marian Rivera, Kim Chiu, Megan Young, Solenn Heussaff, Isabelle Daza, Lovi Poe, and Jennylyn Mercado her seal of approval by following them all on Instagram. She even gave Georgina a special shout out by posting a photo of the model with the caption, "Werkin’ that come hither stare. @ilovegeorgina has #whatittakes." You go, girl! (abs-cbnnews.com) 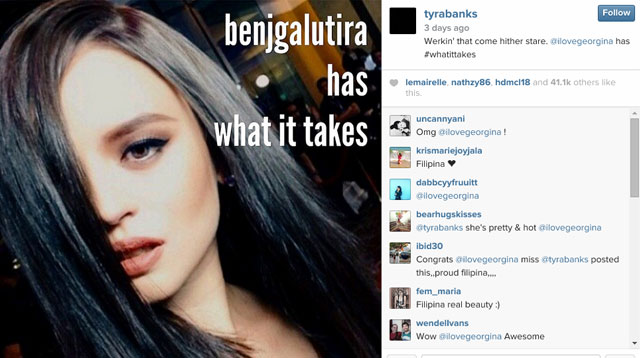 2 Are they or aren’t they? Paulo Avelino and KC Concepcion were spotted hanging out together with a group of friends recently despite speculations that the rumored couple called it quits. While KC posted a video on Instagram of her singing with her friends sans Paulo, a photo uploaded by Instagram user @mgalasingkagabi proves that Paulo and KC were indeed together that night. (abs-cbnnews.com)

4 Just one more day until the Cosmo Bachelor Bash! Are you excited? If you don’t have tickets to the bash there’s no need to fret because you can watch the 2014 Cosmo Bachelor Bash livestream online via Cosmo.ph! Tune in starting 8 p.m. tomorrow night to get in on the action. We suggest you bookmark our livestreaming page HERE.