1 Neil Patrick Harris and partner David Burtka finally tied the knot! The two are parents to adorable almost-four-year-old twins, Gideon and Harper, and got engaged in 2011 after the Marriage Equality Act in New York was passed. Later on, they announced that they actually got engaged five years prior, but kept mum about it. In 2013, Neil mentioned in an interview that they wanted to get married, but they just didn’t know when the right time was. He said, "Certainly, we have children and marriage is an appropriate thing to do [as] a part of their well being, so I'm sure it will be inevitable—and awesome!" Guess what, they also got Elton John to perform at their reception! (E! Online)

Guess what? @DavidBurtka and I got married over the weekend. In Italy. Yup, we put the 'n' and 'd' in 'husband'. pic.twitter.com/R09ibF41rt

2 ICYMI: Royal Baby number two is on the way! Prince William shares that he and wife Duchess Catherine are ecstatic for the arrival of their second child. In an interview on Monday, he also shared that Kate has been having severe morning sickness lately, and ended by saying, “I’m going to go and look after her now.” Aww! <3 (People.com)

3 Why was KC Concepcion a no-show at the Star Magic Ball? People were surprised to see our COSMOMEN cover guy Paulo Avelino arrive at the Star Magic Ball without our September cover girl. But apparently, KC wasn't able to attend because of a family emergency. She said on Instagram: “I was supposed to be at the Ball tonight in my RAJO gown. Mita got rushed to the ER & now confined at the hospi. As they say: #FamilyFirst. Aww!“ (ABS-CBN News)

5 Guess where we'll be this afternoon? Oh, you know, just hanging out with the COSMOMEN Centerfolds, NBD. *Wink, wink!* Cosmopolitan will hold a press conference later at 3p.m. in preparation for the Cosmo Tower 69 Bachelor Bash co-presented by GUESS. A shout-out to our major sponsor Smart and minor sponsors EasyShop.ph, Lactacyd Cool & Fresh, and Skin White, and special thanks to Century Tuna! Visit Cosmo.ph at 3p.m. for live updates, and follow us on Facebook so you won't miss a thing!

TICKETS TO THE COSMO BACHELOR BASH ARE NOT FOR SALE! If you want to get tickets, here's how.

Have you seen the #COSMO69 video? WATCH IT NOW!

Read more about KC CONCEPCION in Cosmopolitan magazine's September 2014 issue, which comes with a FREE COSMOMENsupplement featuring PAULO AVELINO on the cover! 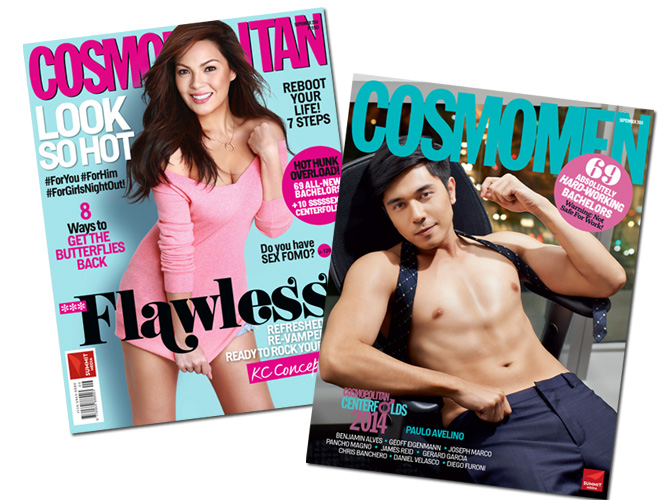