Taylor Swift Donates To Foundation For Survivors Of Sexual Assault

1 After winning the sexual harassment case against radio host David Mueller, Taylor Swift is making good on her promise to donate to foundations that help survivors of sexual assault. The Joyful Heart Foundation, "which focuses on the healing process of victims of child abuse, domestic violence, and sexual assault," is the first organization the singer has contributed a generous amount to. (Just Jared)


2 Die-hard Encantadia fans are already looking forward to the show's sequel. But according to GMA Senior Vice President for Entertainment Lilybeth G. Rasonable, it won't be happening this year. "It's something we really have to think about and really brainstorm about because we have to give something different again na aabangan. But we're not closing our doors definitely, not to a project like Encantadia." Director Mark Reyes also said that a sequel cannot be rushed since they're still waiting for Kylie Padilla, who gave birth on August 4, 2017. (PEP.ph)

3 The Internet is freaking out over how much this Mexican woman looks like Selena Gomez. When netizens noticed that 22-year-old Sofia Solares bore a striking resemblance to the pop star, they started leaving her comments on her Instagram photos. See how alike the two are below. (E! Online)

4 While in St. Tropez, France on July 2017, real-life BFFs Kate Winslet and Leonardo DiCaprio hung out at his villa when the two were in town for Leo's annual charity gala. It's refreshing to see the two enjoying the sun instead of the freezing Atlantic Ocean in Titanic. (Cosmopolitan)

5 As a treat to beauty addicts in the Philippines, Sleek Makeup is having a one-day sale on August 18, 2017 at their counter in Robinsons Galleria. Everything will be 30% off so it's the perfect time to stock up on your favorites before the long weekend! You can sign up here before going to get priority access. ;) 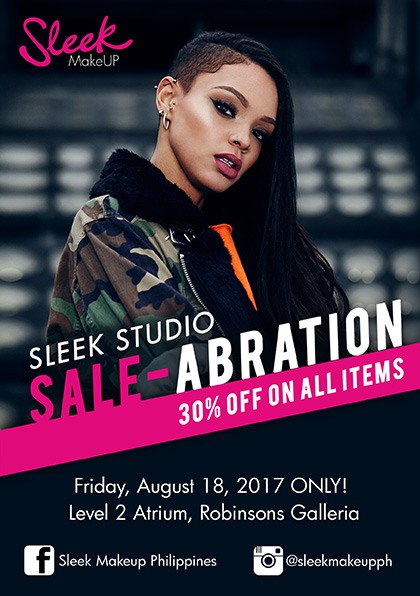