By now, you've probably finished watching Netflix's new hit series 13 Reasons Why and have a lot of unresolved feelings about it. The series follows a group of high school students whose lives are rocked when their classmate, Hannah Baker, commits suicide, leaving behind a set of tapes on which she explains the reasons why she did it. We listen to the tapes through the eyes and ears of her good friend Clay Jensen.


The poignant series sheds an important and much-needed light on the dire effects small aggressions, bullying, slut-shaming, and sexual assault can have on someone's life. But as important as the message of the series was, it's still hard to accept at the end of the series that nothing can be done to save Hannah Baker.

Or is there? MoviePilot has found a subtle but important detail in 13 Reasons Why that could change the way you think about the series and how it applies to real life.

In the final episode of season 1, several of the names on Hannah's tapes are subpoenaed and brought in for questioning in an investigation into Hannah's death.

While Zach is being questioned about Hannah, his deposition is framed like you're looking through a camcorder and a timestamp can be seen in the bottom left corner that indicates the depositions are taking place on November 10, 2017. 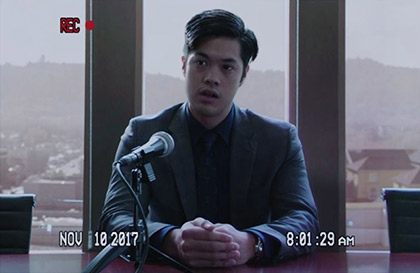 There was a Halloween party in episode four of the series, suggesting that Clay was listening to Hannah's tapes in the last weeks of October. Since Hannah committed suicide shortly before the series starts, that suggests she probably did so in late September to early October.

The time stamp on the deposition tapes suggests that in our real-world timeline, Hannah is still alive.

Some of the terrible things Hannah experienced in the series have already happened, like getting slut-shamed by Justin's friends because he lied about having sex in the park, Bryce groping her at the convenience store, Jessica's betrayal, and Marcus groping her on Valentine's Day.

But since it's only July IRL, Bryce probably hasn't raped Jessica and Hannah yet. Sheri hasn't downed the stop sign that resulted in Jeff's death. And Mr. Porter hasn't insensitively handled Hannah trying to report her rape by telling her to "move on."

This subtle detail sends a message, whether the producers of the show intended it or not: there's still time.

Although we can't change the way events unfold for Hannah in 13 Reasons Why, if there is a Hannah Baker in your life—someone who you know is being bullied or having a hard time and showing signs of depression—there is still time to step in to help and stop the dangerous cycle of silence.

Another important message the series sends is that you can't always know what's going on in someone's life. Sometimes, no matter how kind, supportive, and vigilant you are, you might not notice that someone is suffering. So if you are someone suffering with suicidal thoughts and depression, reach out and get help. <3