K-Pop Star T.O.P. Has Reportedly Been Hospitalized After A Suspected Drug Overdose

Big Bang fans are rallying on Twitter and beyond to show their support for the group's longtime member T.O.P., who is currently recovering at a Seoul hospital. The group's agency YG Entertainment confirmed to the Korea Herald on Tuesday that T.O.P., whose real name is Choi Seung Hyun, was found unconscious from an apparent drug overdose and has been receiving treatment at an intensive care unit. The 29-year-old singer and actor apparently overdosed on tranquilizers he had been taking for medical reasons, according to police.

Idk what to say. All I know is that I am sad for TOP. Now, he's in the ICU. Wake up, Choi Seung Hyun! #BIGBANG #TOP pic.twitter.com/2vnKsCeeo0

T.O.P.'s hospitalization comes off the heels of a marijuana scandal. He was officially charged last Wednesday for smoking the substance, which is illegal in South Korea, with a 22-year-old female singer at his home in Seoul last October. The charge puts his mandatory two-year military service in jeopardy; he temporarily left Big Bang in February to begin his service, which must be completed before the age of 35. The Korean military police issued a statement on the indictment, noting, "There is a law that states a soldier can be expelled if he is not fit to fulfill his duties. We will soon be ordering him to leave the division."

On Sunday, T.O.P. released an apology letter through his agency, YG Entertainment, writing, "I have no excuses and deserve any kind of punishment. I feel very regretful and fearful for having left an irreparable scar in everyone's hearts, including our members, my agency, friends and family. I will reflect on my wrongdoing over and over again." 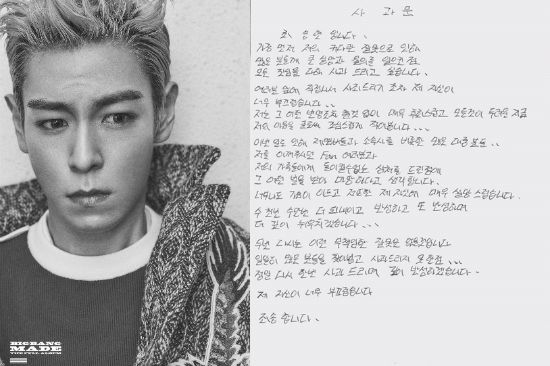 Big Bang first lit up the K-pop scene in 2006 with their debut album Bigbang Vol. 1 and have sold more than 140 million records worldwide. The group, comprised of T.O.P., G-Dragon, Seungri, Daesung, and Taeyang, released their third Korean studio album Made in 2016 following a brief hiatus, along with the documentary Big Bang Made celebrating their 10-year anniversary.