Vice Ganda is known for his eye-popping outfit choices, but the ABS-CBN host just got caught in the middle of a fashion faux pas.

The It's Showtime host was called out by Diet Prada for allegedly wearing high fashion knockoffs.

Diet Prada, an Instagram page handled by Tony Liu and Lindsey Schuyler, is known for criticizing brands and personalities for creating or wearing knockoffs.

On Sunday, February 24, Diet Prada uploaded on their Instagram Stories photos of Vice Ganda's outfits and compared them to international brands.

In one of the posts, the Instagram page showed Vice Ganda wearing an alleged imitation of a piece from Viktor and Rolf's Spring 2019 couture collection.

Diet Prada wrote on their post, "Filipino actor/singer/comedian Vice Ganda turning it out in some imitation @viktorandrolf couture....

"Like the sentiment, but what's with the electrical tape execution?"

Some netizens noted that both gowns had the same silhouette. Aside from changing the color, the original statement printed in front of the gown was changed from "SORRY I'M LATE I DIDN'T WANT TO COME" to "YOU DON'T GAIN ANYTHING FROM HATING US."

Viktor and Rolf is a fashion house founded in 1993 by Dutch designers Viktor Horsting and Rolf Snoeren. 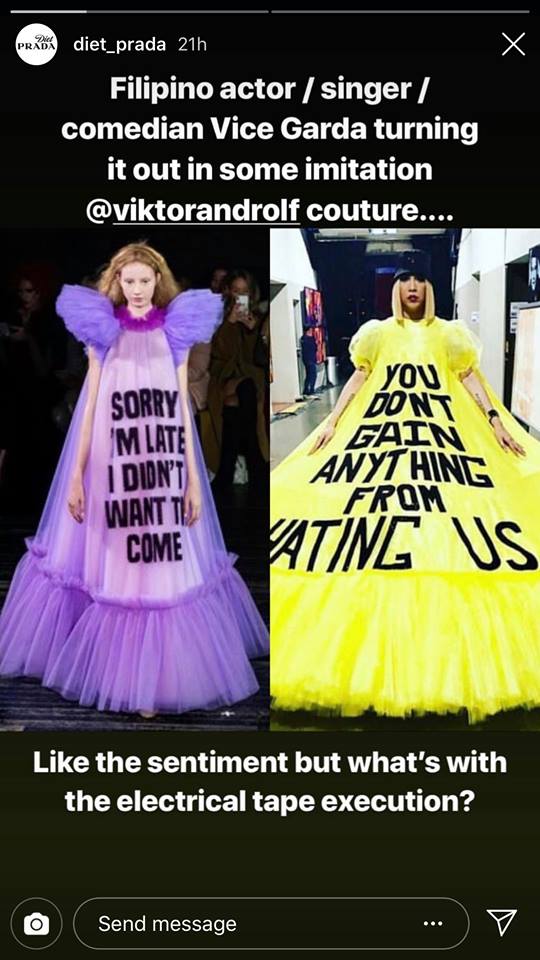 Diet Prada also called out Vice Ganda for wearing a headdress which looked similar to what American pop superstar Beyoncé wore for her 2017 Grammy Awards performance.

Beyoncé's piece was made by House of Malakai.

Diet Prada wrote on the post, "Who could forget @beyonce's ICONIC headdress by @houseofmalakai during her (pregnant) 2017 Grammy performance?" 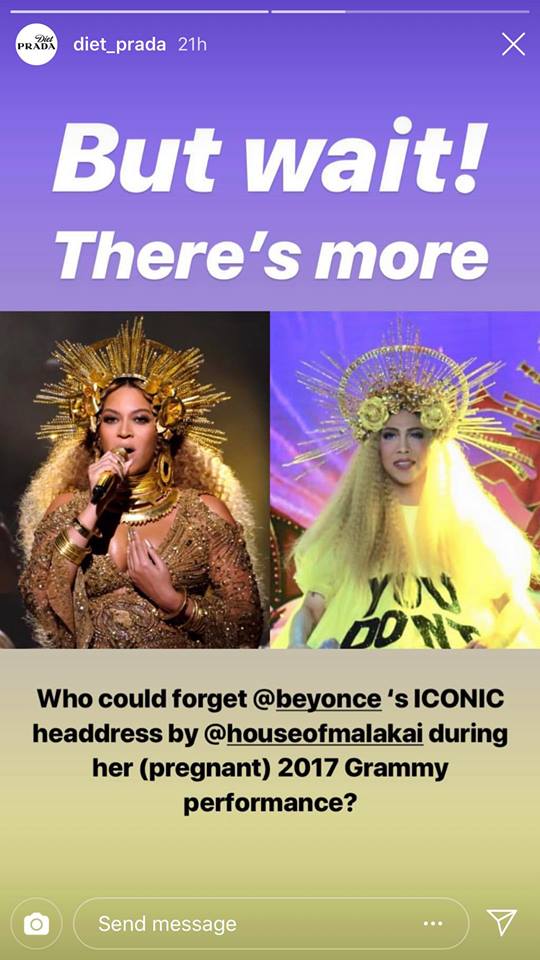 Vice Ganda wore both outfits on Saturday, February 23, during the grand finals of It's Showtime's beauty pageant segment called "Miss Q & A" held at the Araneta Coliseum in Quezon City.

The Kapamilya host-comedian had four outfit changes during his opening performance, where he sang a medley of Queen's "We Will Rock You," Sara Bareilles' "Brave," and Rachel Platten's "Fight Song."

Vice Ganda has yet to address the issue on his social media accounts. In the past, he has worn outfits created by Filipino designers, but were inspired by pieces from luxury brand's collections.