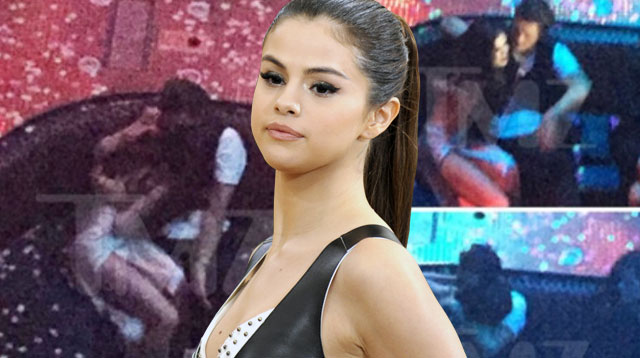 Orlando Bloom has reignited rumors of a romance with Selena Gomez after the couple was spotted together in Las Vegas.

Days after stepping out at the Met Gala with girlfriend Katy Perry in New York City, the British actor, 39, was caught on camera appearing to get intimate with Selena in the VIP area of the Light club at Sin City's Mandalay Bay resort.

Justin Bieber's ex, 23, went braless in a slinky silver gown as she attended her after-party at the hotspot on Friday night, after kicking off her Revival World Tour at the casino venue, where Orlando joined her in the early hours of Saturday.

The pair has previously denied claims of a secret romance, but new photos obtained by editors at TMZ.com suggest the stars are completely at ease with one another, with Selena appearing to nuzzle Orlando's neck in one picture, and laying back into his arms in another shot as they relaxed in a VIP booth. They were also spotted giving one another a tight hug in a third snap.

An eyewitness tells TMZ they were very "touchy feely" during the club outing, but Selena left the party alone. Another source reveals to People.com that Orlando warmly kissed the popstar on the cheek as they hung out together, but they are "absolutely just friends."

Both stars have yet to comment on the telling weekend photos. The Pirates of the Caribbean hunk, who was previously married to Australian model Miranda Kerr, dismissed dating rumors in October, when he and Selena were spotted at Los Angeles International Airport together. Days later, the two were spotted in Vancouver, Canada, as they attended the city's WE Day youth event.

While their close friendship may be strictly platonic, the eye-raising images could land Orlando in trouble with Katy Perry, who he has reportedly been dating since meeting at a Golden Globes after-party in January.

They have since showed off their affection for one another on outings in Los Angeles and vacations in Hawaii and Aspen, Colorado. Ironically, Katy, who spent the weekend at the Renaissance Festival in California, already has "Bad Blood" with one of Selena's best friends, Taylor Swift. The two pop princesses have been embroiled in a war of words ever since Taylor appeared to out Katy as a mean girl in a magazine article.