An aspiring model was struck and killed by a train in Navasota, Texas on Friday while posing for a photoshoot on the tracks that she hoped would help launch her career.

Authorities report that Fredzania "Zanie" Thompson, 19, and her photographer were standing between two sets of tracks at a railway crossing taking photos at around noon. According to The Eagle, one set of the tracks belonged to BNSF and the other to Union Pacific, and the teenager was standing on the former, facing towards an oncoming BNSF train. She then tried to cross the tracks in order to avoid it, but was struck by a Union Pacific train coming from the opposite direction on the other set of tracks.

Buzzfeed reports that Thompson was immediately rushed to the hospital, where she was pronounced dead. Witnesses state that despite both trains blowing their horns, she did not see the oncoming train behind her.

"This horrific incident is the reason they don't want individuals and kids playing on rail tracks, because trains come intermittently and you don't know when they come," Navasota Director of Public Safety Shawn Myatt told Buzzfeed.

Speaking with The Eagle, Thompson's mother Hakamie Stevenson said that her daughter was a student at Blinn College, but decided to put her education on hold in order to pursue a modeling career. She added that her daughter was also a star volleyball player, hair and makeup expert, and a role model to her younger siblings. Thompson, who would have turned 20 on Monday, was also engaged to her 25-year-old boyfriend, Darnell Chatman, who said the couple had recently found out they were expecting. 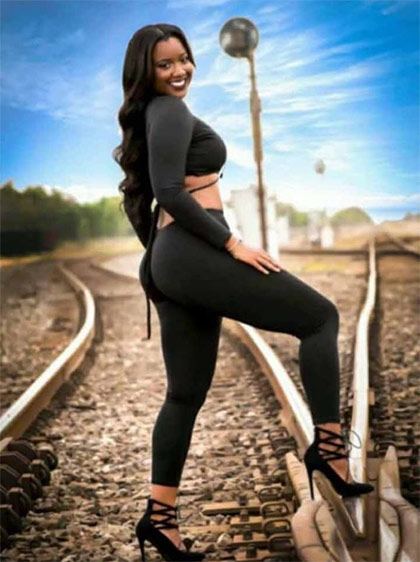 In honor of the Thompson's memory, friends and family have created a memorial in her honor, and her friends have shared one of the last photos taken of her from that day—showing Thompson smiling wide while posing on the tracks. A funeral was held for Thompson last Saturday at Brosig Auditorium.