This music sensation has risen above her famous roots with her unique sound and positive attitude. See exclusive photos from her Fun, Fearless Female Awards shoot!
by CJ de los Santos | May 24, 2012
Post a Comment
Featured 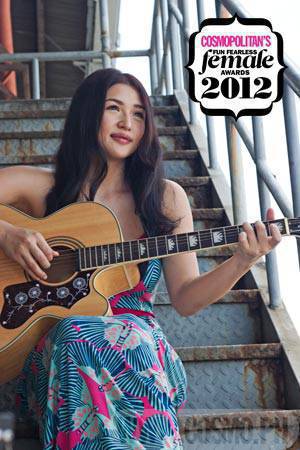 When a rising star hails from a showbiz family, it's often difficult for them to build a rep apart from their famous clan. But 20-year-old Zia Quizon--daughter of Comedy King Dolphy and Divine Diva Zsa Zsa Padilla, and younger sister of Karylle--has managed to make a name for herself through her sheer talent as a singer, musician, and songwriter.

After releasing her self-titled debut album just last year, Zia's career has already reached incredible heights, from being a featured artist on ASAP Rocks' Acoustic Republic to winning the MYX Music Award 2012 for Favorite New Artist. Her sultry voice and jazz vibe make her stand out from other young female stars on the airwaves today, and her music videos show off an artistic and charming side to this singing sensation. (Check out "Ako na Lang," featuring Cosmo Centerfold for 2011 Enrique Gil!)

We met up with Zia at the Summit Studio for her Fun, Fearless Female Awards 2012 shoot and got to witness her passion for music firsthand. Launch the gallery to see behind-the-scenes photos, and watch for her interview and video footage on CosmoTV!