Oh Goody, Now Science Is Telling Us When We Should Be Trying To Get Pregnant

Don't worry, it was probably about 5 years ago. We're all in the same boat.
by Catriona Harvey-Jenner | Aug 1, 2015
Post a Comment
Featured

Christ, we're barely out of nappies these days when scientists are telling us we ought to be thinking about settling down and starting a family.

And as if social pressure to hurry on up and start pro-creating wasn't at an almighty high already, a bunch of Dutch scientists are now trying to give us an official sell-by date. Oh goody.

Based on how many children you think you might want (that's another decision we should probably all have made before we've even started full-time jobs, apparently) these wise guys are advising us on when we should cut the contraception and get those babies a-cookin'. 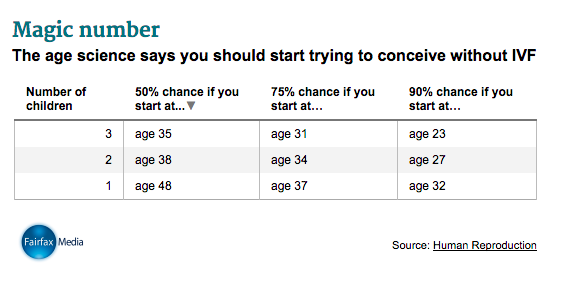 Ok, ok. It's only the conclusions they've made based on the scientific studies they carried out, and nature does mean that our ovaries do actually have an expiry date. We get that much. But we're just saying, it's not all that helpful for women who are already burdened with a societally-induced urge to pair up and settle down, to add a ticking time bomb to the minefield it already is.

So don't worry, we're not going to pay attention to it either.