The "Convince Her To Get Bigger Breasts Manual" Will Shock You

Inside the manual: "tips for men to let them shape, cajole, or brainwash their women to becoming their 'dream girl.'"
by Stephanie Shi | May 19, 2015
Post a Comment
Featured

Apparently there is a book for men who are into big breasts that will help them convince their girlfriends or wives to get a boob job. It’s called The Convince Her To Get Bigger Breasts Manual. It’s written by a 59-year-old man named Ivan LeCasque with the help of his girlfriend Victoria, 47, who increased her breast size from 26D to 26K for him. According to them, the manual helps men around the world get what they truly want from their partners. A bit surprising that it’s not actually sex. Well, not exactly: Ivan believes big boobs make intercourse "transcendental" for men. Interesting thought: Sex would be so much more "transcendental" if we were to make love with Channing Tatum. Are there surgeries for that? 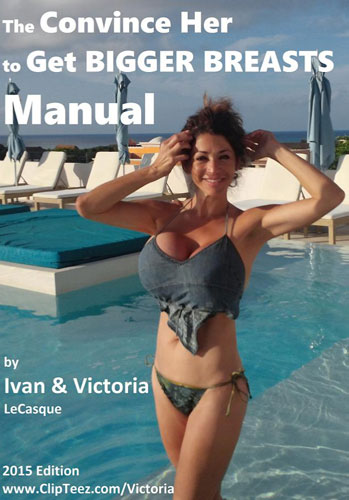 The book was written after Ivan's friend suggested that he make one, after noticing that Ivan's three consecutive partners had their breasts augmented while dating him.

“I have a feeling that the interest in big breasts began about a million years before Playboy ever appeared on the scene,” Ivan said on The Mirror. He adds that he loves big breasts because they’re tactile—they feel “great” when he makes love to a woman.

Sure, let’s say men are hardwired to be attracted to big boobs. But does this mean they should be able to convince their partners to get implants? If you check implants4her, where the book is being sold, you’ll find some tips for men to let them shape, cajole, or brainwash their women to becoming their “dream girl,” that is, someone with an ample bosom.

The site reads, “It has nothing to do with bribing her, nor pressuring her. We show how to make it exciting, how to make it her quest too, not just yours. The Convince Her [to Get Bigger Breasts] Manual is more than 110 pages of exactly what you need: specific tips, words, and lines of conversation that will lead to your objective.”

Many have been calling the book sexist, misogynist, and manipulative. But Victoria completely stands with the techniques found in the book—as if that argues against the book’s sexism. She and Ivan believe that big breasts are advantageous not just to men, “who can [now] have sex with [their] eyes open,” but also to women, in that they get more attention, feel sexy, and boost their self-esteem. Victoria adds, “I think it’s wrong for women not to pander to their men. Why not give into [their husbands’] fantasies or desires? I think that in a relationship you need to have a slight change once in a while. A relationship becomes stale if you stay the same person intellectually or physically.”

Let’s not forget that we age, and growing old with our partner is a moving thing. We don’t exactly need a boob job for that—clearly someone needs some convincing. If a woman wants one, she can get one. But for a man to talk her into wanting and getting a boob job for himself is downright selfish. There's nothing innately wrong with giving into a partner's fantasies or desires—but to somehow be duped into it by a manual? Whatever happened to openly talking things out, and with no one manipulating the other?

Does the book work? Ivan says that everybody who bought one says it does.