The 36-year-old actress has truly done it all, from starring in her own television show (sup, Quantico fans) to dabbling in pop music, and she's won beauty pageants along the way. So yeah, she's made hella money. How much $$ does Priyanka actually have in the bank? Allow me to break it down for y'all.

About That Time She Won Miss World

Much like Honey Boo Boo, Priyanka used to live that beauty pageant life. She even had a *huge* moment in the spotlight when she won the 2000 Miss World contest.

It's not completely clear what her prize package consisted of (other than a massive crown), but rumors circulating 'round the internet suggested that the 2017 Miss World winner got over a million dollars. Again, these are just rumors, but we're guessing Miss World winners typically receive *chef's kiss* compensation.

Priyanka's Bollywood career is, in a word, LIT. Like, guys, in 2008 *alone* she starred in seven films. How did she even have time to film them all? That's more than one film every other month?! Maybe she can time travel?! Lucky for her, she's apparently one of the highest paid actresses in Bollywood, earning up to nine crores per film, which is just around a million U.S. dollars.

While you cry over your own salary, go ahead and watch Priyanka in the trailer for Fashion, one of her more succesful films:

Are you sitting down? Because Priyanka's leading role in Quantico made her SO MUCH MONEY. Forbes estimates that she took home $3 million per season, for three seasons total. Which, using the math skills I still have left over from elementary school, means she earned $9 million for working on the show.

Priyanka made her Hollywood film debut in Baywatch in 2017—and while it's not publicly known how much she banked for the role, you better believe she has an exciting career ahead of her. 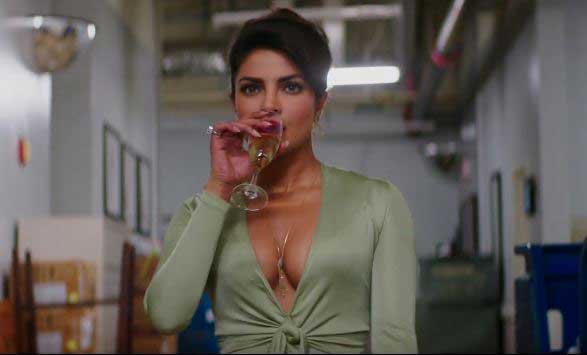 ^Footage of Priyanka on her way home from the bank, feeling badass. (JK, this is from Baywatch.)

Guys, Don't Forget About Her Turn as a POP STAR!

Proving that she can truly do it all, Priyanka was signed to Universal Music Group in 2011 and casually became a singer. She even released a music video in 2013 for her song, "Exotic," which featured freakin' Pitbull.

Priyanka's singing career didn't go super far, so it's fair to assume that she didn't make much money on this single. But whatever, how many of YOU have released singles with Pitbull?!

And Finally, There Are Her Endorsement Deals...

In the year of our lord, 2018, you know that actors (especially actors with poppin' Instagram accounts) make a sh*t-ton of money from endorsement deals. So Priyanka, who is a global ambassador for Pantene, not to mention a global citizen (whatever that means) for GAP, is presumably raking in the dough—though exactly how much dough, we do not know.

So, What's Priyanka's Total Net Worth?

According to Celebrity Net Worth, that would be $8 million—though she makes $10 million per year (the difference is likely due to this little thing called taxes and paying your bills). Oh, and if you're wondering what Nick Jonas' net worth is, the answer is a cool $25 million. Damn, talk about a power couple.