I Was Told I Was Too Pretty To Be A CEO

'I was constantly told that rather than building a company I should instead 'use my face' to endorse products or become a beauty influencer.'
by Iman Oubou Co-Written By Belisa Silva | Aug 27, 2017
Post a Comment

"Did you wear that pencil skirt just for me?"asked the male investor, his eyes traveling up and down my body. A sick feeling washed over me. I had waited six months for this meeting, and was there to discuss a potentially career-changing investment. I said nothing, my face a total blank. Although I had prepared for every possible outcome, good and bad, I never thought I’d face a moral dilemma during a professional meeting. Walking away from the quarter million dollars I so desperately needed to launch my business, I felt lost. What just happened? Was this my fault?

When I decided to quit my nine- to- five job and launch a media platform for today’s generation of female entrepreneurs, I knew it wouldn’t be easy, but I didn’t realize my physical appearance would be the point of focus for so many prospective male partners.

I’ll never understand why women who embrace style are categorized as non-business-minded. Male executives in Armani suits and sleek Italian loafers are seen as powerful, in-demand leaders who will undoubtedly grace the covers of a variety of glossy business publications in various power poses. Female leaders, on the other hand, are instead asked by reporters to share their beauty secrets, fashion choices and how they balance work and parenthood. The underlying perception is that women can only exist as an either or, while men can have it all.

A message to men: Just because she’s wearing a pair of hot pink pair of stilettos doesn’t mean she didn’t just close a multi-million dollar deal.

Women are constantly being put in buckets, labeled as "the girl next door," "the boring and/or bitchy executive," "the sexy model," or the "entitled millennial." Women in business face an amplified dose of judgement. Power relationships in the dynamics of deal-making highlight our vulnerability, because although women represent a quickly multiplying segment of the startup founders community, we are still beholden to the male-dominated world of investors and venture capitalists (only seven percent of the top VC firms are owned by women).

This disparity creates a veritable playground for sexually-charged or emotionally-damaging encounters, often leaving women in a no-win conundrum. By speaking up you may feel better, but you may also find yourself iced out by a network of investors who won’t even take meetings with you. And unfortunately, there’s not yet a huge pool of female-friendly backers to turn to.

The pencil skirt incident was not the only time I was left feeling uncomfortable after a meeting with a potential male partner.

As a former beauty queen (I was crowned Miss New York U.S. in 2015), who is also a scientist (I have a B.A. in Biochemistry and M.S. in biomedical engineering), a fashion lover and a dirt bike enthusiast, I was constantly told that rather than building a company I should instead "use my face" to endorse products or become a beauty influencer.

I’ve been laughed at and described as "just another beauty queen" with a PowerPoint and a dream. Even marketing agencies have told me that rather than spending time branding my company, I should focus on branding myself, because people "like seeing pretty girls." One particularly brazen potential investor even suggested we complete our deal in his hotel room. Suffice to say, there was no deal that day.

The ultimate irony is that my company was born after identifying the disparity between the depiction of male and female professionals in the media. It is based on uplifting women, helping them to be seen as more than just a flat image of passive sexuality or entrepreneurial ineptitude, both of which are categorically untrue. I founded SWAAY to bring to light the voices that prove women’s competency in spearheading innovation, political and cultural movements, and solving the greatest issues of our time, which we are doing in droves. 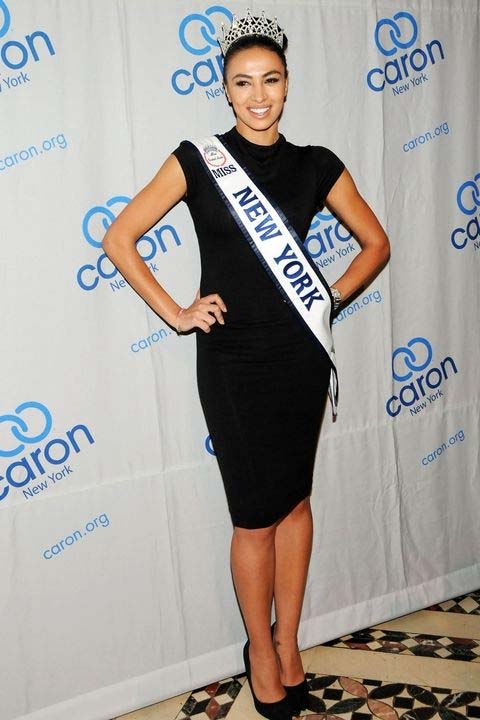 Ultimately it was a man who gave me my first investment—he was someone who saw me as worthy of a chance, believed in my vision, but he really made me work for it. My first meeting with this gentleman, an established older executive from the communications industry, proved that once again my beauty pageant background was a barrier to being taken seriously. I had to work twice as hard to prove that I was going to make my dream a reality, bootstrapping for six months before I earned his respect—and capital. If there’s anything I took away from pageantry, it’s that rejection should only be motivation to prove others wrong, and that’s exactly what propelled me forward. From there, other investors came, including some amazing women and female-focused venture capitalists who live and breath my mission, and personally share each SWAAY that story comes out. I am so lucky that an organic community of people who see the writing on the wall—aka the power of female founders—has formed around me.

Over the past eight months I have had the pleasure of interviewing more than 300 women, each uniquely representative of innovation within their respective fields. These ladies are change-makers: solution-focused, action-oriented, and determined as hell to make a difference.

From a former Maxim model that ran for Congress, to an Emirati figure skater breaking gender barriers in the UAE, to a corporate powerhouse who left her cubicle life to rehabilitate neglected animals, SWAAY cover girls are boldly combining their hearts and minds to reimagine the future of entrepreneurship. I’ve been humbled but I can’t say I’m surprised.

One thing we continually hear from the rockstar female founders we interview is that despite their bold, forward-thinking ideas, detailed business plans and enviably well appointed teams, they are struggling to raise capital, and take to their careers to the next level. These women often talk about the lack of mentors and/or access to investors, and how they’ve had to go through circuitous paths just to get their foots in the door. And it’s no wonder. According to Fortune, a whopping 5,839 male-founded companies received VC funding in 2016, while only 359 female-founded companies did. This inconsistency is not due to the lack of ideas or businesses being built by women, but instead because of an outdated system that favors and uplifts men, while undermining women. Trust me, the world will be much better off, economically, more productive and more peaceful if we empower more women innovators and leaders.

My advice to those women who are struggling to keep their businesses alive is that the worst thing you can do is adopt a victim mindset. Be empowered by your story and your challenges and realize there is a movement happening that you can tap into. If you’ve been undermined by potential partners and investors, stand up for yourself and speak up; there’s more of us than you think.

So, yes I was told I was "too pretty" to be a CEO, and women are constantly being told they are too [insert adjective] here to succeed, but in the words of Ayn Rand it’s not who can let us, it’s who can stop us.

This article originally appeared on Harpersbazaar.com. Minor edits have been made by the Cosmo.ph editors.