I Didn't Invite My Mother To My Wedding, And I Don't Regret It

Having suffered Stevens-Johnson syndrome as a teen, my mother was nearly blind and highly light-sensitive, which kept her indoors every day, away from the light. On top of this, she’d also had several spinal surgeries as a result of a degenerative disc disease. Her ailments resulted in constant medication, with just the electric blue light of the television as a connection to the world.

Throughout my childhood, her depression and negligence meant I had to learn to take care of myself while she chain-smoked alone in her bedroom. The laundry and the bedding were left soiled for months, and the dishes piled to the cabinets, molding over. The outside reflected the inside. Being in poverty and having no help from my essentially absent father, and given her illness, it made sense that our home would take on this filthy state. Her constant insults, however, were unforgivable; “toxic, idiotic little bitch” and “useless, venomous brat” were phrases I heard daily. I tried to grow past it as best I could by staying busy, staying at friends’ houses, and spending time with their parents as compensation of some sort. I hoped someone would see how much I needed to be taken in for good, but it never happened. I sought out emancipation; my mother told me I was “evil.” I dropped it.

The older I grew, the more my hometown started to feel like a sinkhole. If the only mother you will ever have shows her love through cruel outbursts and the occasional slap across the face followed by tears and promises to never do it again, it can feel like that’s what life is, and what love is. I couldn’t grow with her claws under my skin, pulling me into her aching depression. Each time we spoke, she repeated the same behavior: picking a fight, insulting me, crying, attempting to guilt me into apologizing to her for daring to be offended by her cruelty.

When I moved a few hundred miles away at age 20, I thought the distance might give us enough space to heal the wounds between us. For a while, it seemed to be work. I had started a beautiful new life in sunny Santa Cruz with some of the most incredible people I’d ever met, including the man who would become my husband, as well as his family—my new family. One Christmas, my not-yet-father-in-law tearfully held my shoulders as he looked into my eyes and said,

Four years had passed when one day, a normal phone call with my mother turned dark, as they always did. We were talking about my job, my boyfriend, and whatever shows she’d been watching lately, when I heard my mother’s voice travel through the miles of static calling me an “idiot.” It was the last insult I would ever allow her to force upon me. Excruciating as it was to decide she could never be the mother I deserved, I had to burn the bridge.

I ended that phone call and with it, my relationship with her. In those few years away from home, my life had changed so much. I was no longer just a survivor of abuse. The contrast between what I deserved, all the love I had now, and the way she treated me was too stark to permit any longer. She’d mothered in the only fashion she knew how amidst all her own suffering, but I never believed I deserved that cruel quality of our warped relationship. 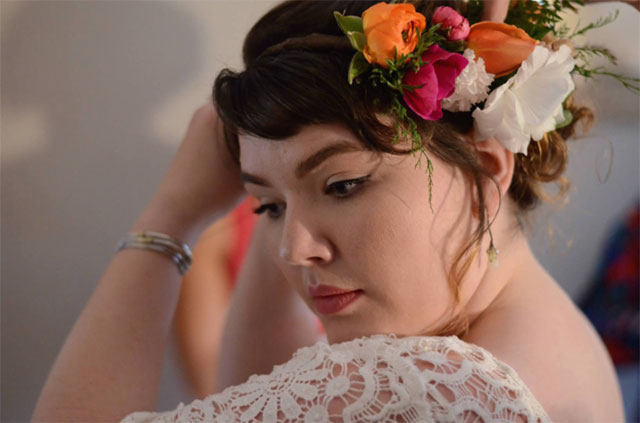 About two months after the estrangement began, my then-boyfriend and I gave each other engagement rings. On that day so full of joy, I did not feel the pang of longing for a mother I’d never had. I did not feel “wise beyond my years,” or as if I did not deserve the love that had entered my life. I felt 24 years old, young, and on the brink of something absolutely unprecedented. The sparkle of that day glowed like silver after a long overdue polishing. It was the first milestone of my life that was not tarnished by wishing I had a "real" mom.

As wedding planning goes, I never did live out the trope of daydreaming of wedding dresses and flowers girls. Once we found a venue, nothing felt stuffy or required; it all felt lovely and easy. Knowing that we wanted to focus on not only our own love but also the love our community made every decision simple, including who to include on the guest list. My mother wouldn’t be on it. We wanted it to be a celebration of our individual lives, and our life together. We had very little money so we stuck to intimacy as a theme in our small reception hall affair. Each piece of the puzzle that was our wedding was made with—as cliché as it sounds—love.

One day, just two weeks before the wedding, I received an email from a friend of my mother’s who mentioned that my mother’s health was declining fast and that she wanted to tell me her “diagnosis” herself.

Nervously, awkwardly, I contacted a trusted family friend to ask for the news I knew was coming; she’d been a lifelong chain smoker, and I’d spent many hours of my life crying, begging, and arguing with her to stop slowly killing herself with cigarettes. I asked. My friend answered.

The grief crashed over me again, fresh as the day I hung up the phone for the last time. I had to decide what would be worse: speaking with her again and letting her be part of my life and my wedding, pulling me back into the vortex of manipulation and anguish; or letting her die without ever speaking to her again.

With my blissful wedding planning twisted into mourning, my stress levels rose to insurmountable peaks. Only the children of narcissistic abusers know how easy it is to both see ourselves being manipulated and to still go on enduring it. If I didn’t get in touch with her, wasn’t I the monster she had always said I was? Well-meaning people told me it was my last chance to “make amends,” and reminded me, as if I did not know, that death is forever. But I could feel in every part of my newly joyful soul that it wasn’t possible to have a healthy relationship with my mother. What’s more, I did not want a relationship with her.

I wondered, did that really make me cruel? Would I regret not inviting the woman who brought me into the world to the best day of my life? Was I such a monster for choosing my own well-being?

Unraveling all of the guilt of letting go of my mother took far longer than it should have. Instead of berating myself for not being a more perfect child, or a more loving, accepting, forgiving person, I should never have held so tightly to the belief that it was my duty to endure. 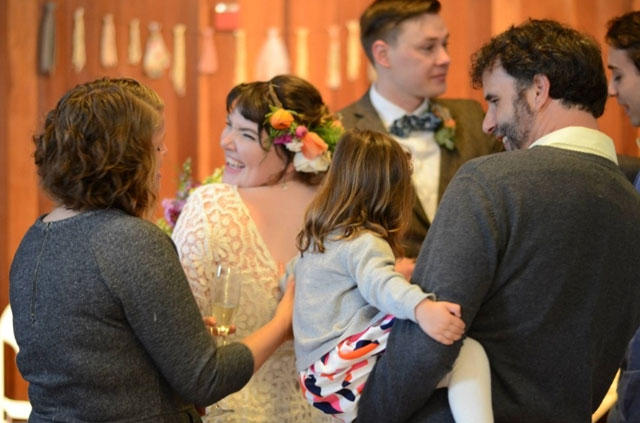 The wedding was a small community event that left me feeling more loved than any other day in all of my life. There was not a single moment that passed without me feeling completely accepted, loved, and celebrated. To my relief, there was no mother-shaped hole. Many moments in my life have been tinged with the sour reality that she created for me, but since letting go of that toxic relationship, I have begun to heal. My wedding day and the trail that lead me there helped me mend more wounds than I could have imagined. My marriage and family, the gorgeous phoenix that rose from the ashes of all the bridges I burned down, is so far beyond what I had ever hoped or dreamed it could be. I am seen for the person I am. I am deeply, wholly loved. There is no more scraping by.

Almost one year to the day after hearing of her diagnosis, I received a text message from a family friend saying that my mother had died. Of course, the grieving came back full force. Grieving for a woman whose last words to you were "you’re such an idiot," is a painful, complex process. But along with the pain of accepting her death also came a second great unburdening. When she died, part of me that had been held prisoner by her broken, selfish heart was released back to me, and now I share all that I am with a loving family who has taken me in for good.