It ranked higher than French, Greek, and Spanish cuisine.
by Anri Ichimura for Esquiremag.ph | Feb 21, 2021
Post a Comment
Featured

According to research by Chef's Pencil, Filipino cuisine is the 10th most popular cuisine as showcased on Instagram. The social media platform might not be the jury handing out Michelin stars, but for people who love to eat, it's where millennials and Gen Z share their snaps of favorite cuisines and dishes. And there's no denying the influence of social media in the restaurant industry. After analyzing Instagram tags around the world, Chef's Pencil found the top 10 most popular cuisines: 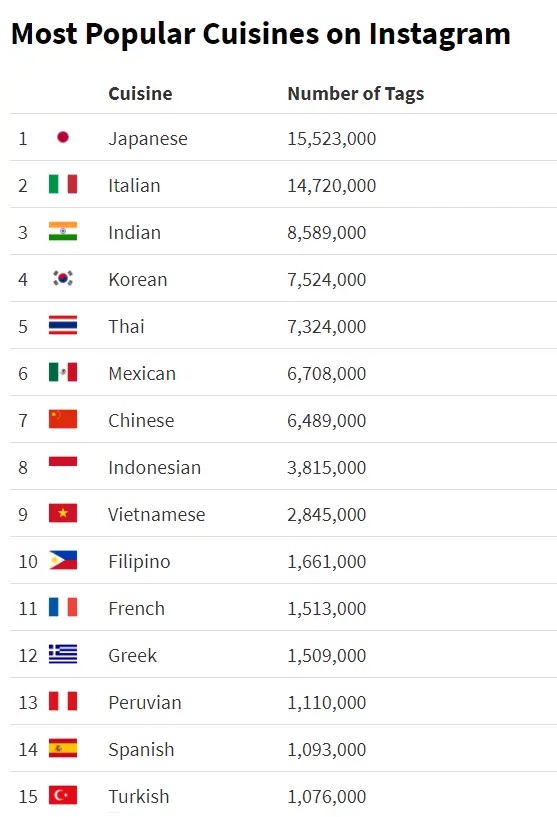 That's right. Our humble Filipino food, home of sinigang and lechon, beat French, Greek, and Spanish cuisine—the latter being a huge influence on Filipino food. But we shouldn't be so surprised. A few months ago, Chef's Pencil declared the Philippines as the number one underrated foodie destination in the world, describing Filipino cuisine as a "unique fusion."

Vietnam and Thailand were also part of the list, and together with Filipino cuisine, the three proved to Chef's Pencil that "pretty much all of Southeast Asia deserves more respect and higher recognition in the culinary world."

Japanese cuisine is the most popular on Instagram. Aside from being consistently delicious, it's also visually pleasing, because in Japan, "you eat with your eyes first" to complement the experience. Asian countries clearly dominated the list taking eight out of 10 slots. Chef's Pencil credits this to the aesthetic value of these cuisines, as well as the simple fact that Asian cuisine is naturally healthier than other food, making it a perfect match for health-conscious youths on social media.

So, there you go. One of the most popular cuisines is right here at home.