The A-list Hollywood star joins the "Avon Believe World Tour," a global campaign that aims to empower women and end their suffering. Support her cause.
by Claire Betita-Samson | Feb 28, 2011
Post a Comment
Featured 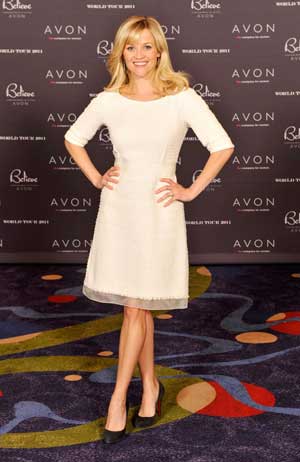 A lot of us totally admire award-winning actress and Avon Global Ambassador Reese Witherspoon. What's not to love? She's living proof that it is completely possible to move on beautifully and gracefully from a failed relationship--and be able to live a full life that serves as a marvelous example to us, young women like her. She has always been one of those fun, fearless females you can certainly look up to, on- and offscreen--yes, we will forever love her for her unforgettable and empowering role as Elle Woods in Legally Blonde, among others, but what she does as Reese, as herself, is something that leaves a greater impact on our lives.

During the event in Atlanta, Reese and Andrea announced the creation of a new $1 million Avon Global Believe Fund that will launch a pioneering global effort to support women’s domestic violence shelters and agencies in each of the 16 cities on the tour. The Avon Foundation for Women will partner with the National Network to End Domestic Violence (NNEDV) to identify and fund an international network of outstanding nonprofit organizations to help them provide critical life-saving services for victims of domestic violence and their families. This global effort also aims to draw attention to the alarming lack of adequate services for women and children who are victims of domestic violence in communities everywhere.

Reese told attendees of the event: “Approximately one in three women globally is likely to experience some type of violence in her lifetime. It's a sad fact, and I believe we all have an obligation to address this vitally important issue, one of the most prevalent yet underfunded problems in the world."

You, too, can take after your idol Reese and support this cause. Like her, you should condemn violence against your fellow women--including yourself, if you happen to be in such a tragic situation. Stand up to violence and make your fun, fearlessness count for something, Cosmo chick.

To see snapshots of Reese from the event, launch the gallery by clicking the button below.


With reports from Amie Perez