10 Picturesque Swimming Pools You Can Find In The Philippines

Ah, summer. Though in our year-round tropical climate it's perfectly acceptable to hit the beach absolutely anytime, there's really nothing like the charm of the season to get you in the mood for a swim. Your feed's also starting to itch for some sun, we reckon, so why not take a dip and a snap? Below, we've rounded up 10 photogenic, picturesque pools—right here in the Philippines!—for you to lounge in on and off the 'gram.

Our jaws hit the ground when we spied this square on Camille Co's IG. Hue's rooftop swim is unique beyond belief! Envisioned to be hip and creative while providing premium accommodations in Palawan, the 122-room hotel prides itself in its design forward and culturally rooted architecture.

Get ready to walk the tightrope between sky and sea here. Vista Aplaya's mirrored infinity pool sits riiight on the horizon, and clever angling can make for the most ethereal sherbet-tinted sunset shot. Anilao also happens to be a prime spot not too far from Manila for diving, so that's a huge bonus! 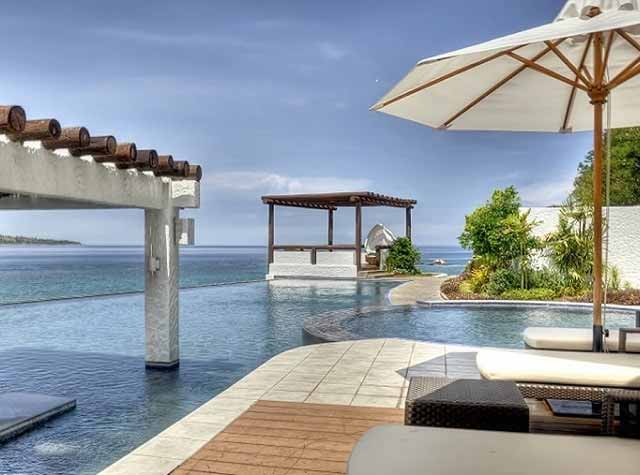 Never been to Marinduque? Bellarocca's stunning grounds should be reason enough for you to make the journey. White Santorini-inspired structures blend into lush green terrain—the perfect backdrop for any dream getaway. Built on Elephant Island and nestled near the hidden islands of Mindoro, expect nothing but the trappings of paradise with a capital P.

The tranquil Sumilon Island remains one of Cebu's best-kept secrets: in fact, it's the first marine protected area in the Philippines and was made a fish sanctuary in 1974 under the guidance of Siliman University Marine Reserve. Explore and you'll find white sand beaches, mangrove lagoons, and natural limestone-studded caves lurking nearby.

Introducing a chic, eco-friendly pin that's just a quick drive from Manila! Book here for a concept hotel that's minimalist, stylish, and smartly designed—everything in Azumi is engineered to make sense. A plus: Azumi is home to the only saltwater infinity lap pool in the metro. Check out that city skyline view!

See for yourself why The Times Magazine gave Ariara the Best Private Island crown on its Most Glamorous Places in the World list. This is the hideout to snag for the most decadent of house parties and barkada trips! The entire island is available to let for up to 18 guests and was designed by renowned Filipino architect Jorge Yulo, so if you're in the mood to take the whole gang on an incomparably luxurious vacay, you know where to look.

Right in the heart of Makati, I'M boasts a ton of firsts: it's the first five-star hotel in Makati's Poblacion district and it houses the first Onsen Spa in the Philippines, making it the largest urban spa property in the country. The clear-bottomed pool is a sight to behold even mere seconds after entering the building (think of it as an interactive experience between swimmers and lobby loungers).

Balinese-flavored architecture is Ananyana's star feature! Sip a cocktail with a toe in the pool and your eyes on the sea—if you like to double dip, you're welcome to have both here. Spend the day roaming Panglao's smaller islands then go for a dive, or simply chill by the shore for hours on end.