Hotel rooms look pretty clean on the face of it. The beds are made, freshly laid towels are in the bathroom, and there's usually a pair of nice, fresh white slippers waiting for you in the wardrobe.

But how hygienic are they really? You might have seen THIS unfortunate picture, where a hotel customer discovered a note in among the bedsheets. 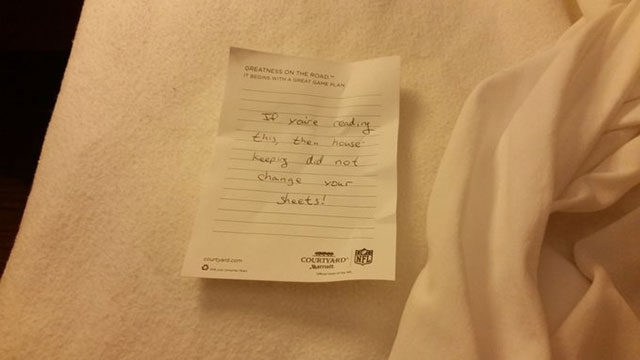 "If you're reading this, then the housekeeping did not change your sheets," it reads. Gross.

We're going to believe that's an exception, though. Usually the sheets are clean; it's not them you need to worry about. Because according to recent research carried out by ABC News, it's actually the water glasses you need to steer clear from.

ABC News investigated 15 hotels across America, and worryingly discovered that 11 of them failed to remove dirty glasses from rooms, even though they had been used by previous inhabitants. Which is kind of horrendous, if you think about it.

Instead of swapping the glasses over with clean ones, many of the hotel maids would just rinse them out, and wipe them with a towel. One maid was even caught drying glasses with the same towel she'd wiped her own hands on. Mmm, sanitary. 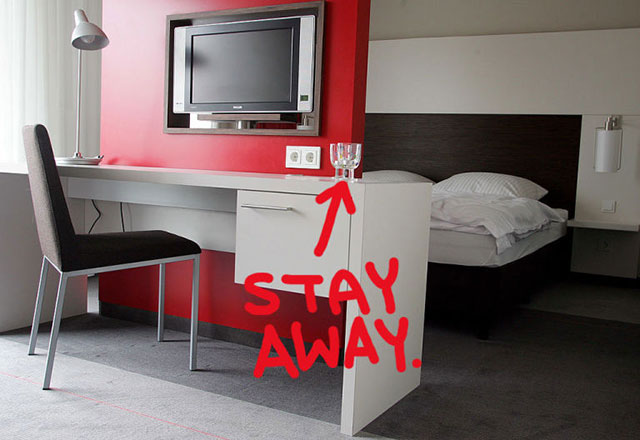 But not only that, they also discovered that in one particular hotel, instead of taking the glasses to be washed in the kitchen with the rest of the glassware, a maid actually used Lysol mildew remover. For anyone who doesn't know, that's a mold removal bleach, and is extremely poisonous when consumed.

I'll personally be keeping a supply of bottled water next to my bed in any hotel I stay in from now on. And I suggest you do the same.