He first made us swoon by losing his shirt as one of our Centerfolds. Now, even fully-clothed, we can't help but fall for Enrique's charm! View pics and scenes from our second shoot with him.
by Nora Hizon | Nov 29, 2011
Post a Comment
Featured 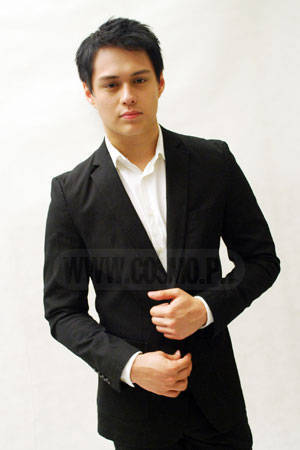 Enrique Gil instantly became every Cosmo girl's favorite hunk the moment he appeared on our Cosmo Men supplement in September as one of our Centerfolds and made us scream for more at the Cosmo Bachelor Bash 2011. And we know you just can't get enough of him, so we're featuring him again as our main guy two months later for our Man On Fire spread (where he tells you the "Things That Make A Girl Stand Out," pp. 56-57).

He's no stranger to the attention, although he's relatively new in the biz. The 19-year-old actor started appearing on television commercials and musical theater shows in 2008 before eventually becoming part of Star Magic and appearing in teleseryes such as Pieta, Rosalka, and Mara Clara.

But, 2011 is arguably Enrique’s year, as he was given his biggest breaks yet when he bagged one of the lead roles in the Mula Sa Puso remake, starred in Good Vibes, and is currently seen in the series Budoy--yes, on top of being one of your fave Centerfolds!

From being the handsome boy-next-door to going sexy by shedding his top for Cosmo, he now piles on layers of clothing to be that debonair manly man for this month's Man On Fire feature. And, it still totally works--he's hotter than ever! Launch the gallery to see behind-the-scenes photos of Enrique’s second Cosmo shoot, and watch the video here!


You still have two days to grab the November ish of Cosmo, with Carla Abellana on the cover, to see Enrique's feature on the magazine!