More than a week ago, a teenaged soccer team and their coach entered the seven-mile-long Tham Luang cave system in Northern Thailand, before being trapped within the caves by rising floodwaters. The caves are regularly flooded during the country's rainy season from July until September or October.

After extensive searches by dive teams and the Thai military, all thirteen members of the group were found alive on the evening of July 2, 2018, but they could be trapped for months before they are able to get out. One of the teens just celebrated his 14th birthday in the cave.

A video posted on Facebook by the Thai Navy Seal shows the boys huddled on a ledge above water responding to divers with flashlights. When they ask when they can leave, the divers tell them they have to wait, but that they'll be back tomorrow. (It's been reported the group was found only by chance, and that the divers were thus not prepared to offer immediate assistance.)

According to The New York Times, British civilian divers John Volanthen and Rick Stanton had a breakthrough when they chipped away at rocks and enlarged a passageway that had been too small to pass through while wearing an air tank. Once they created a large enough opening, they were able to push on to where they suspected the group was, roughly three miles from the cave entrance.

The group may have to learn to dive or face waiting for the flooding to recede, the BBC reports. However, experts have warned that taking inexperienced divers through the corridors of muddy, zero-visibility waters would be very dangerous. 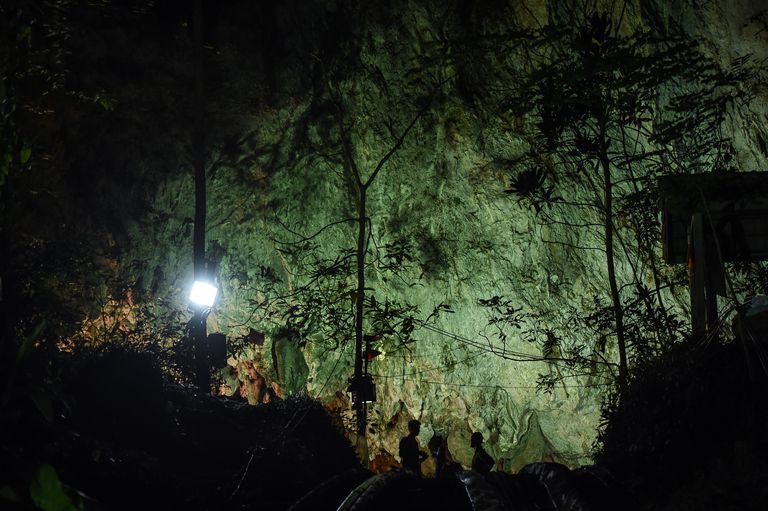 Thai military sources have suggested they may need to have food sent in until water levels have dropped sufficiently for the group to exit without diving. Specially trained doctors are also reportedly being prepped to enter the caves to carry out medical assessments in the next few days to establish their condition and treat possible injuries.

Meanwhile, Chiang Rai governor Narongsak Osotthanakon said that attempts were also being made to install power and telephone lines inside the cave so parents can contact their children.

The BBC adds that teams are still searching the mountainside to find other ways in and out of the caves.