12 Signs You Are In Love With Each Other

Wondering if the kilig feeling will last for long? Here, Cosmo names hints that you’re hot for each other and have what it takes to make it last.
by Gregory Gillego | Sep 8, 2009
Post a Comment
Featured

It’s the paradox of being part of a long-term twosome: Though your devotion to each other is deep, at some point, the supernova-hot love sparks that made your pulse pound during your early dating days start to fizzle out. And without that love buzz, even the most confident chick is left wondering if her once-smoldering relationship has lost some of its juice.

Don’t panic. Truth is, the passion that fueled your union likely hasn’t disappeared—it’s simply hiding within your real-life couple routine. “The first year that you’re together, your attraction is so new, you get goose bumps just [by] looking at each other,” explains Pepper Schwartz, PhD, author of Everything You Know About Love and Sex Is Wrong. “But as you become a steady duo, those fireworks just reveal themselves in different ways.”

Below, check out the signs of a sexy, healthy, thrilling, and fulfilling relationship—year two and beyond.

Hot-For-Each-Other Hint 1: He brings out your most dynamic side.

When you’re with your man, your self-confidence bumps up a few notches and you feel like you’re capable of tackling anything. And with you by his side, his charm rubs off on everyone in the room. That’s because couples whose love rush is still raging highlight each other’s greatest qualities: They feel happier, smarter, and stronger knowing that their partner has their back.

There’s actually a genuine physiological reason why his presence magnifies your personality (and vice versa): When two people possess serious chemistry, being in close proximity triggers the production of the energy-upping hormone adrenaline. “That power surge acts like a brain stimulant, amping your best features each time you’re together,” Schwartz says.

Hot-For-Each-Other Hint 2: Even after so much time together, you sometimes look at each other and can’t stop grinning.

Hot-For-Each-Other Hint 3: You get mad as hell at each other.

Passion manifests itself in various ways: think toe-curling sex, a fierce nurturing instinct…and the occasional tear-your-hair-out argument. So if you and your guy feel like wringing each other’s neck every so often, don’t take it as a bad omen—seething is a sign of a healthy union. “Feeling really intense anger now and then is generally a sign of passionate feelings,” explains Nanette Rowe, PhD, a psychologist in San Mateo, California. “It’s the flip side of the extreme emotion that brings you that rapturous love high.” 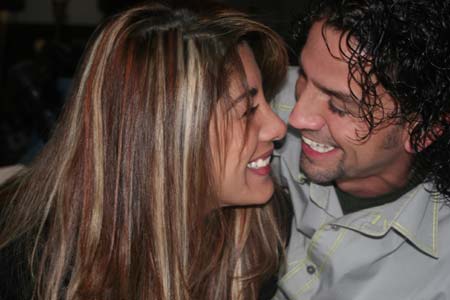 Hot-For-Each-Other Hint 4: Your pulse pounds when you receive a text from him.

It’s normal for early-dating love jitters to lessen once you become a serious couple. But if your connection is for keeps, the buzz won’t disappear—it will just show up when you least expect it. For example, you get giddy when you hear his key in your door earlier than you had anticipated. Or your heart races when he reaches to pull you closer when you thought he was asleep. “You can’t fake those signs. They’re your body’s way of saying your bond is as intense as ever,” says Schwartz.

Hot-For-Each-Other Hint 5: Basketball scores interest you…as well as other things you don’t even like.

You rush home to download Fringe so your man can watch his favorite show after work...even though science fiction dramas rank at the bottom of your personal TV ratings. And despite the fact that you don’t know an offensive foul from a defensive one, you feel bummed when his favorite team loses because you know he’ll be disappointed. You’re not turning into a Stepford girlfriend; you’re just tuning in to the things your man digs. “You know you have an intimately connected relationship if you find yourself so invested in the other person’s happiness you get caught up in pastimes that otherwise have zero appeal,” says Schwartz.

Take it from Kate, 20, whose chick flick-hating boyfriend always lets her know when the latest weepy romantic drama is finally out on DVD. “He’s a serious movie buff, so it must kill him to keep tabs on sentimental girlie films. He says he doesn’t mind because he knows I’m such a big fan.”

Hot-For-Each-Other Hint 6: You feel really tender toward him when you see him sleeping.

Hot-For-Each-Other Hint 7: In the middle of sex, you stare into each other’s eyes…and you don’t turn away.

Hot-For-Each-Other Hint 8: You brush the hair out of his face spontaneously.

Any run-of-the-mill duo can show off their devotion by showering each other with sickeningly sweet PDA. But when a couple’s connection truly crackles, they’re more likely to indulge in ordinary, unplanned touches, like your casually sweeping stray hairs away from his eyes or your guy’s gently squeezing your knee as you sit side by side at the movies. “These seemingly insignificant gestures require one person to move in on the other’s personal space, conveying a deep sense of connectedness,” says Rowe. “They suggest that the desire for close contact is so strong, you literally can’t keep your hands off each other.”

These playful moves also help stoke your sparks. “Skin-on-skin contact makes you feel ultra close,” says Schwartz. “An affectionate touch on your guy’s part can prompt you to respond just as intimately, further reinforcing your desire.” 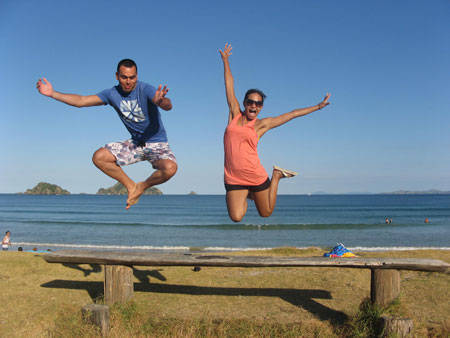 Hot-For-Each-Other Hint 9: When a crappy situation strikes, you crave his help.

“When something truly rattles me, it’s my boyfriend’s take that I really want,” explains Maureen, 29. “He doesn’t necessarily have a solution, but I always know he’s listening.”

Seeking your man’s help with a dicey situation over the input of friends and family demonstrates that you two are riding the same love wave. “When your strongest instinct is to turn to him for support and empathy, it shows you have a deep trust and respect—two factors that keep your love more intense,” says Schwartz. He may not be the first person you call when you have news to share, but his POV is the one you’ll pay the most attention to.

Hot-For-Each-Other Hint 10: You strut your stuff for him in your sexiest mini.

We’re all for lounging around the house in comfy loose shorts and oversize t-shirts, but tingly-for-each-other twosomes don’t make the grunge look a habit. Instead, they occasionally don a sexy outfit or scent with one goal in mind: to rev each other’s erotic engine. “Turning your man’s head reveals the electricity in your love link. It shows that you want him to be attracted to you because you’re still so attracted to him,” says Schwartz. “If you two didn’t have this urge to look sexy for each other, your relationship might be content, but the passion level would be low,” she adds.

Hot-For-Each-Other Hint 11: He’s on your mind at work, when you’re at the gym, while shopping at the mall with pals….

So you’re pushing your cart through the supermarket when you come across a shelf of those snack chips your guy likes so much. Without thinking, you grab a few bags, because he’ll be thrilled to find them in your kitchen. Or while downloading some ’80s tunes, you automatically make a copy of each one for your man, sure that he’ll get a kick out of the music nostalgia trip. Couples whose relationships have run out of steam aren’t on each other’s mind like this. But if you and your man are always thinking of each other when you’re apart, consider it a tip-off that your passion is pumping hard.

“Coming up with different ways you can bring happiness to each other illustrates your excitement and importance to each other—a definite sign of solid love,” says Rowe. It’s also a subconscious strategy to stay connected when you’re separated. “It’s a way to share experiences, which keeps your bond buzzing,” she adds.

Hot-For-Each-Other Hint 12: You can’t help but wonder what he was like as a little kid.