6 Mysteries Of The MALE MIND--Cracked!

Here, some fascinating facts about male behavior to help us try to figure men out.
by Jing Lejano | Sep 14, 2011
Post a Comment
Featured 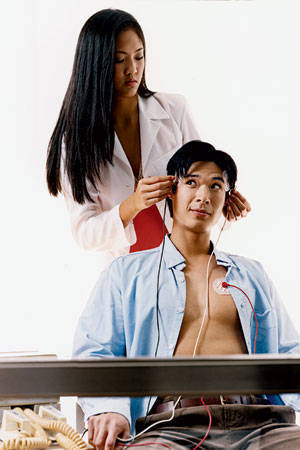 No doubt, your man's "typical guy behavior" (keeping his feelings top-secret, playing b-ball with his dirty socks, calling you "right back" two hours later) has been so exasperating at times that you've wanted to wring his neck. Well, before you do anything crazy, realize "the way a man approaches a romantic relationship is largely dictated by the circuitry of his brain," says marriage and family therapist Pat Allen, PhD, coauthor of Getting to "I Do." In other words, it seems boys will be boys and there's not a damn thing you can do about it.

Wait, there's good news: Knowing how his brain ticks can lead to a tighter bond. Cosmo guides you through the strange, yet fascinating, male mind.

You're obviously aware of the physical differences between the sexes, but "there are significant variations between the male and female brain, which cause men and women to think, feel, and behave in different ways," says Allen. Here's how our minds don't meld:

• Per one theory, a major variation could be the size of the corpus callosum, a bundle of nerves that acts as a bridge, allowing thought signals to transfer between the left side of the brain, which deals with language and logic, and the right hemisphere, which deals with feelings and thoughts, explains Allen. Some believe a guy's corpus callosum is smaller than a woman's. So while our emotional thoughts cruise between hemispheres at 90mph, his may get stuck in gridlock. The upshot: Men often suck at talking about their feelings because they are less likely than women to translate their emotions into words.

• Men are able to compartmentalize information, stimulus, and emotions better than women. In his mind, chatting up a cute chick at a party has no bearing on his feelings for you…and he can't comprehend why something so seemingly minor would piss you off.

• Men place priority on achievement, while women tend to focus on forming relationships. In the workplace, he's content with the fat paycheck and corner office. Of course, we want that too, as long as we also have a few colleagues we can call friends.

• His brain takes in less sensory detail than a woman's, which may help to explain why he never seems to notice things like when you get four inches cut off your hair. He's less aware of his environment.

2. They Fall In Love Faster Than Chicks Do

The common consensus is that women fall head over heels, but it turns out guys might be more love-at-first-sight types. "Men tend to be visual, so when they see a woman they like, they're apt to become instantly enamored," explains anthropologist Helen Fisher, PhD, author of Why We Love: The Nature and Chemistry of Romantic Love. When a chick meets a hottie, her brain goes into auto analysis: What does he do? Where does he live? Is he nice? All a guy is thinking is She's hot. I want her now!

"This behavior may have evolved as a way to ensure survival of the species," says Arthur Aron, PhD, professor of psychology at the State University of New York at Stony Brook. "Love could have a biological foundation in which suitors seek intimate relationships for mating." Meaning: Our cavemen ancestors courted women who appeared ripe for baby rearing. While this evolutionary holdover may make men lose their hearts in a flash, these fuzzy feelings can be fleeting. Ever have a dude ask for your digits and then fall off the planet? He probably liked you in the moment, but without your visual presence, the magic was gone.

Ever sit next to a guy with his legs so spread-eagled you wanted to ask if he paid for two seats? Granted, he may crave the leg room, but guys also spread out because it's a territorial position. Thanks to all that testosterone coursing through their bods, they're compelled to become masters of their domain.

"Testosterone creates a biological drive in men to attain dominance," says Allen. "Competing, controlling, and conquering are inherent in the male psyche. By splaying his legs he's asserting power and simultaneously keeping other men at bay."

Of course, he also might be showing off the family jewels. "Men may open their legs so women notice their genitals," says Allen. "It signifies their sexual prowess and potency." Hey, they don't have decolletage to put on display, so they use what they've got.

4. They Demonstrate Their Devotion

It can be infuriating when your guy is so close-mouthed, you feel like you need a crowbar to get him to open up. But, as we've already said, he's just not equipped with the same communication tools as you are. Besides being better at translating feelings into words, chicks are also more emotionally articulate than men because of our chemical makeup. "Since estrogen, a hormone that is associated with verbal skills, is so prevalent in women, they tend to process emotional stimuli with words," says Fisher.

"Meanwhile, testosterone, a hormone linked to physical assertiveness that is prevalent in men, can cause them to process emotional stimuli with a physical reaction," says Fisher. In plain English, as far as guys are concerned, actions do speak louder than words. "Men have a vocabulary of deeds," says Anne Moir, PhD, coauthor of Brain Sex.

"They tend to share their feelings through gifts and favors, such as holding a door open. It's man speak for 'I care about you.'" So the next time your guy waits up to fetch you when you O.T. or brings you your favorite dish with some DVDs when you're sick, consider it an outpouring of amour.

5. They're Predisposed To Get Around

"Men are driven to have sex with many women in order to spread their seeds," says Moir. "It's an evolutionary need to propagate." They also sleep around because they have less difficulty emotionally disentangling themselves after booty. "When a woman climaxes, levels of the bonding chemical oxytocin can remain elevated for days, creating the illusion of attachment," says therapist Michael Gurian, author of What Could He Be Thinking? "In men, oxytocin levels spike but quickly return to baseline. Thus, they don't experience that same extended emotional connection."

6. But…They Often Thrive Within A Marriage

If men are predisposed to get around, how—or why—do many of 'em end up hitched? One theory: Guys place a premium on rules and regulations, so they respect the conditions of the marriage contract.
"Because men tend toward linear thought patterns, they relate well to systems and order," says Fisher.

There's also their competitive nature. "A guy doesn't want to be labeled a failure if he can't live up to the terms of the contract," says Fisher. That competitive streak also fuels a drive to keep other men away. Entering into that contract sends the message to bachelors—who value rules as well—"She's mine, back off!" "Knowing she's on his team gives him a sense of security." So guys want security in a relationship? Maybe the sexes aren't so different after all.