6 Ways to Train Your Boyfriend

We don't believe men are dogs, but some behavior-molding techniques used on canines and other beasts can work on a guy and make him a better man.
by Jing Lejano | May 22, 2013
Post a Comment

“You can’t change a man” is one of the oldest clichés in the book. Well, we just discovered some news that challenges that notion, and it comes from an unlikely source: animal trainers.

“Males are card-carrying members of the animal kingdom, and they exhibit a lot of the same behaviors as many other mammals,” says Amy Sutherland, author of What Shamu Taught Me About Life, Love, And Marriage: Lessons For People From Animals And Their Trainers. “So they’re likely to respond to some of the same training techniques.”

Sutherland is speaking from experience. After spending a year at an exotic-animal training school, watching students in action, she successfully applied the techniques to her husband. In less than a few months, she was able to curb some of his undesirable traits.

We know you so want in on this. That’s why Cosmo uncovered time-tested methods used by the most successful animal trainers on the planet. Then, we got top psychologists to show you how to apply those techniques to your guy. Read on and you will soon be able to teach him some new tricks.

Indulge His Playfulness As Used on Chimpanzees
These primates are big mischief makers, so getting them to calm down can be a real bitch. Luckily, if you indulge their silly side, you have a good shot at getting them to pay attention. “When we need the chimps to perform a task, we get on their level and play with them for five or 10 minutes,” says Eugene Cussons, rescue director on Animal Planet’s Escape To Chimp Eden. Once they’ve had some fun, they’re more willing to heed commands because they instinctively know it’s their turn to return the favor.

Apply It to Your Guy
No matter how old they are, men never quite lose touch with the playful, naughty boy within. Too bad they often pick the worst times to bring out that brat—like when you’re running late for work or need them to do some errands for you. To get what you need done, “indulge him with a few minutes of acting goofy,” says Anthony Riche, PhD, author of Finally! How To Stop Dating Losers Forever. Then, tell him you’ll finish playing with him later, as long as he does the dishes or does whatever else you need him to do. Since his mind and body are now surging with feel-good chemicals from your brief, fun exchange, he’s less likely to wrinkle his nose at the request, says Riche. Use this technique consistently and, over time, he’ll be less likely to associate chores with drudgery.

Reward The Good, Ignore the Bad as Used on Dogs
Pretraining, a pup will sniff crotches and paw at people’s legs. The instinct is to shoo it away, but that only makes it want to sniff and paw more. “Instead, trainers reward the dog when it behaves and ignore any actions they don’t like,” says Sutherland. Since dogs crave affection, they slowly begin to avoid bad habits and opt for good ones.

Apply It to Your Guy
Perhaps your man could use some finessing when it comes to social situations, too—say, to curb his habit of telling off-color jokes. When he engages in unseemly behavior, your immediate reaction might be to tell him to knock it off already. But that tactic invariably falls on deaf ears.

“Men don’t want to be treated like children, and if you correct him, he’ll feel like you’re mothering him,” says Patricia Covalt, PhD, author of What Smart Couples Know. Instead, ignore him when he’s being irritatingly obnoxious, and give him some PDA (think a kiss or a tap on the butt) when he’s acting sweet. Since guys—like dogs—aim to please, he’ll instinctively begin to avoid the behavior that makes you freeze him out. One caveat: Timing is crucial. Be sure to reward him at the exact moment he engages in a positive behavior; otherwise, he won’t be able to make the appropriate connection.

Take Baby Steps As Used on Elephants
These mammals can learn a variety of tasks but only on an incremental time line. “A trainer would never expect an animal to learn something without teaching it how to do it,” says Sutherland. For example, if trainers want an elephant to paint as part of a circus act, they’ll first show the animal how to curl its trunk around the brush. Next, they’ll have it dip the brush into the paint. Only then would they show it how to create brush strokes. Animal trainers call this process of using small steps toward learning a new behavior successive approximations.

Apply It to Your Guy

The average guy is romantic by heart, but he’s not hardwired to plan out the little details. So if you can’t remember the last time he put together a sexy night in for you both, you’ll have to show him the way. Start by staging the place with cues that get you going, like candles and a sultry soundtrack. Have your favorite chilled wine on hand so you can ask him to open it before dinner. This creates a ritual in his mind. Eventually, not only will he get a sense of what your romantic needs are, but he’ll also start making a game plan of his own. 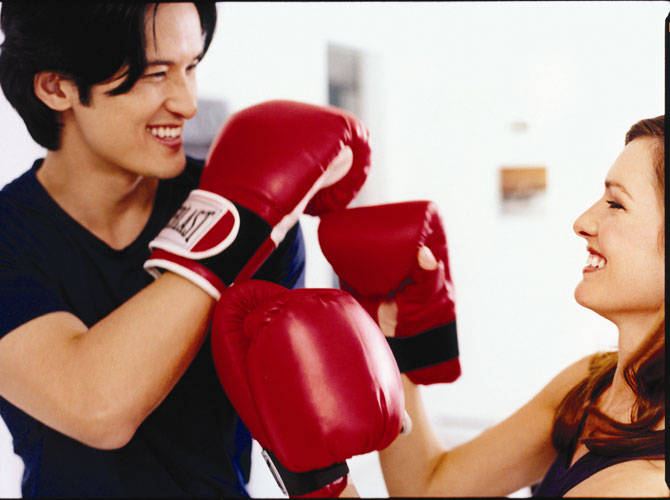 BOYFRIEND BUMMER 4: He Bolts When You Argue

Keep A Cool Head As Used on Horses
Beneath the powerful stallion exterior lies a skittish animal. “That’s why they generally respond well to a calming voice and touch from trainers,” says Patricia Barlow-Irick, PhD, equine-behavior specialist in New Mexico.

Apply It to Your Guy
Like horses, men seem to be hardwired to want to bolt at the first sound of irritation. So, even if he’s been working your last nerve, try to approach him in a cool, collected manner (remember, as hard as it sounds, this is all going to benefit you in the end). For instance, if you are pissed that he hasn’t been planning enough date nights or can’t stand when he forgets to call while he’s out, your instinct might be to yell or get pissed. Instead, keep your composure by taking a few minutes alone before you approach him, then speak in a quiet, even-toned voice. “Calmly telling him what he did wrong will make it easier for him to tune in to what you’re saying,” says Covalt. Touch also plays a crucial role in this scenario: Place your hand on his as you speak. Not only does this buffer the blow of your words, but it also -mimics the comforting way a trainer strokes a horse’s mane to calm the -animal down.

BOYFRIEND BUMMER 5: He Stands His Ground

Use Proper Body Language As Used on Cougars
When trainers want a cougar to bend to their will, they find a middle ground. “Instead of trying to submit or dominate a cougar, trainers try to form a cooperative relationship,” says Sutherland. They walk tall with squared-off shoulders. This stance ensures that the trainers don’t look like prey, but they’re not threatening either.

Apply It to Your Guy
Even the most liberated guy can feel emasculated by a fearless chick. So, when you’re having a heated conversation with him, he might be unconsciously responding to your body language. “If you’re standing really close to him with your hands on your hips and your feet wide apart, he’ll get defensive and instinctively want to fight back,” says body-language expert Patti Wood, author of Success Signals. Similarly, if you stand meekly and tilt your head while talking to him, he might take it as a sign that you’re too submissive. “The best way to stay on equal ground is to stand with good posture, your head up, and an open frame, so he sees you as being on the same level as he is. This way, he’ll be more apt to want to talk things through with you,” says Wood.

BOYFRIEND BUMMER 6: He Won’t Drag His Ass off The Couch

Approach Him At The Right Time As Used on Lions
Lions are, in a word, lazy. According to trainers, they sleep for up to 20 hours a day and only move when they see it as beneficial to themselves. “Trying to get a lion to do something when it’s in resting mode can be very difficult and even dangerous,” says lion wrangler Dave Salmoni, host of Animal Planet’s After the Attack. “That’s why we make use of the animal’s active time instead of trying to force it into doing something it doesn’t want to when it’s chilling.”

Apply It to Your Guy
A man in veg-out mode is unlikely to move his rear no matter how much you try to engage him. “You have to gauge when he’s in a productive mood and then pounce to get him to do what you want,” says Riche. If you notice that he prefers working out in the morning, that’s a good time to ask him to help you clean when he’s finished. If you need something done during his downtime and don’t want to wait, bribe him. “Motivate him by making it worth his while,” says Riche. When you feel like you haven’t been able to have a heart-to-heart but he’s in a coma in front of the TV, try luring him with his favorite snack. If his cravings for the food outweigh his interest in the TV, he’ll eventually cave.