Four months after Facebook announced the launch of Facebook Dating, a dating app built within the app, the service launched to a test audience in Colombia. 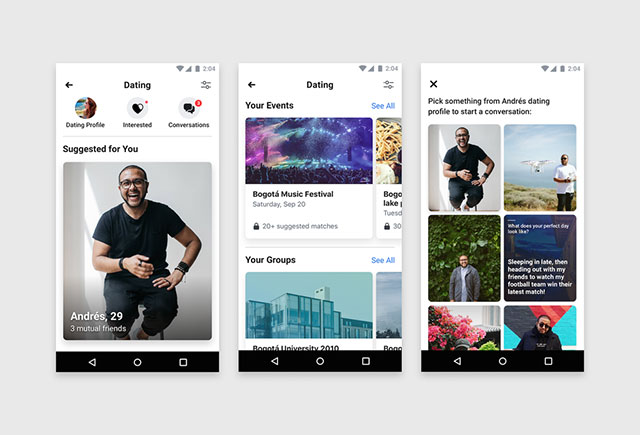 This is the first glimpse anyone's gotten at the app, which isn't actually an app, but another tab within Facebook. People who want to use it will be able to set up a separate Facebook Dating profile, in addition to their regular Facebook profile, that's only visible to other Dating users. Facebook says none of the activity you log on Facebook Dating will show up on your News Feed, or elsewhere on the app.

Based on screenshots, Dating looks a lot like the current iteration of Hinge—there won't be any swiping (like on Tinder and Bumble), and instead, users will have to answer question prompts to get conversations rolling.

And because Facebook already knows basically everything about you—like what you Like, which Events you're planning to go to, and what sort of Groups you belong to—Facebook Dating will integrate this preexisting knowledge into its dating service. Dating users will be served suggested matches based on things they've already liked on Facebook—so maybe all those really lame proto-meme pages you liked in 2005 are now going to play a major role in your romantic life.

Dating users will be able to opt-in if they want to see if any other Dating users (who've also opted-in) are going to certain events they're marked as attending, or belong to groups they join. The idea is to get more people to meet IRL than on the actual Dating service.

"More than 200 million people have listed themselves as single in their relationship status on Facebook," Nathan Sharp, product manager for Facebook Dating, said in a press release. "We view this as an incredible opportunity to continue helping people build relationships in meaningful ways on Facebook."

There's no word yet on when Facebook Dating will be available to users outside of Colombia.