Cosmo shares three ways to make the pre-show just as phenomenal as the main event.
Aug 7, 2009
Post a Comment
Featured 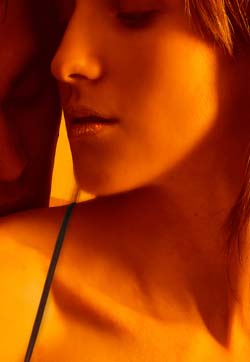 When it comes to pre-sex passion, every mind-blowing minute counts. “The longer you can hold off on penetration, the more intense the eventual act (and orgasm) will be,” says Gloria Brame, Ph.D., a clinical sexologist in Georgia. “As you build anticipation, you also build psychological and physical arousal.” Meaning: By the time he hits home, both of your bodies and brains will be begging for it. Wow your man with the ultimate warm-up in these ways:

Go Over The Undies

To add a deliciously different element to your foreplay repertoire, keep your slinky underthings on. “That small bit of fabric creates a barrier that adds to the sexual frustration, making the payoff that much more powerful,” Brame points out. To start, tease each other into a frenzy by stroking each other’s nether regions over the material.

Get naked and sit face-to-face with your man. With a barely-there touch, slowly run your fingertips over his face, down his neck, across his shoulders, and along his arms all the way to his hands. This sensual stroking will electrify his nerve endings and prep his pleasure centers for more extensive exploration.

Up the ante by repeating the process, but extend the passion path to include his chest, stomach, inner thighs, and other sensitive spots. Just keep your hands off his goody bag until he’s practically climbing the walls. Now go for the gusto…but take your sweet time. As you inch closer and closer to his package, he’ll be aching with “Will she or won’t she?” anticipation. That’s why when you finally hit his jackpot, stroking and fondling his penis and balls, you’ll shoot shock waves of pleasure through his system.

Knock At The Door

You both know how intense that moment is when your man finally enters you. So you can imagine just how achingly arousing it would be to have him hanging around the entrance without actually going in. Take the tip of your man’s member and use it to tease the outside of your vagina, especially the clitoris. Move the head up and down and around, whatever way feels good. Not only is he turning on your main moan zone, but his supersensitive penile tip is receiving its own rubdown.

Dying for more? Let him poke just the head of his penis around the entrance then have him pull back, poke, then pull back. When you can’t take one more second, grab his buns, and pull him deep inside you.