Keep Him Interested By Controlling The Chase In 7 Sitches

Learn the subtle differences that make for the perfect flirting style, and neither being pakipot kuno nor trying too hard.
by Patricia Dayacap | May 11, 2011
Post a Comment
Featured 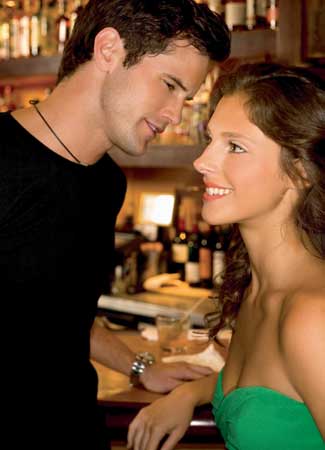 Men love the thrill of the chase in the beginning, but they'll move on if their efforts aren't paying off. Try these tips for handling your new guy in different situations.

Pakipot Kuno: Answering his calls with loud music blasting in the background to show off your active social life—even though you're home alone.

Trying Too Hard: Phoning him "just to say hi" at least once a day.

Suave Style: Never calling him more than once without him calling you back and making convos short enough to keep up the intrigue.

Pakipot Kuno: Declining if he doesn't invite you three days in advance—even if he just purchased Beyonce tickets for tomorrow.

Trying Too Hard: Letting him know your weekend is "wide open."

Suave Style: Agreeing to last-minute plans only every so often.

Pakipot Kuno: Responding "Who r u?" to his text a day later.

Trying Too Hard: Texting him your location at all times.

Suave Style: Sending short texts and resisting the urge to engage in volleys.

Pakipot Kuno: Despite your urge to make out, barely kissing him for several dates.

Trying Too Hard: Putting out on the first date—do this and his brain will switch to one-night-stand mode.

Suave Style: Though there's no magic number of dates to wait to have sex, simply making sure it's accompanied by an actual date to avoid being relegated to F-buddy status.

Pakipot Kuno: Accepting his friend request a week after receiving it, but first posting an album full of photos of you and random dudes.

Trying Too Hard: Immediately changing your relationship status to "It's complicated," then friending him...and his best buddies.

Suave Style: Letting him friend you, accepting within 24 hours, then sending the occasional funny—and unsentimental—private message.

Pakipot Kuno: Answering any call or text you receive while out with him, even if he's talking to you.

Trying Too Hard: Suggesting a restaurant voted “most romantic” online.

Suave Style: Complimenting his wine choice and letting him know you love the restaurant he picked.

7. HANGING OUT AT PARTIES

Pakipot Kuno: Spending all night chatting up guys to prove you're desirable.

Trying Too Hard: Acting like a leech and being glued to his side.

Suave Style: Introducing him to your friends and checking in with him throughout the night. And if it's mostly his buddies, befriending them but allowing a little space.