9 Women Share What They Wore When They Met 'The One'

“We met at a Halloween party thrown by his fraternity for my sorority,” said Becky. “My friends and I were all Miss America contestants and I was Miss Tennessee. The dress was something I wore pretty regularly and the boots were comfortable, so I felt pretty good about it. He says he remembers it, but who knows, really? We always joke that his opening line was ‘I like your dress.’ Now, he says he just knew he had to come talk to me.”

“We met at a mutual friend’s place, where we were pregaming,” said Amy. “I was wearing a white tank top, a black skirt, tights, and booties. It was January, so I imagine I had a big coat on as well. I wore these purple elbow-length fingerless cashmere gloves and these horrible bracelets from some fashion designer. I think that after a couple drinks, I put one or two of them around my ankles. This makes me sound like a hot mess, but I was 23! To this day, Rick still remembers the gloves as ‘those weird things you were wearing on your arms.’” 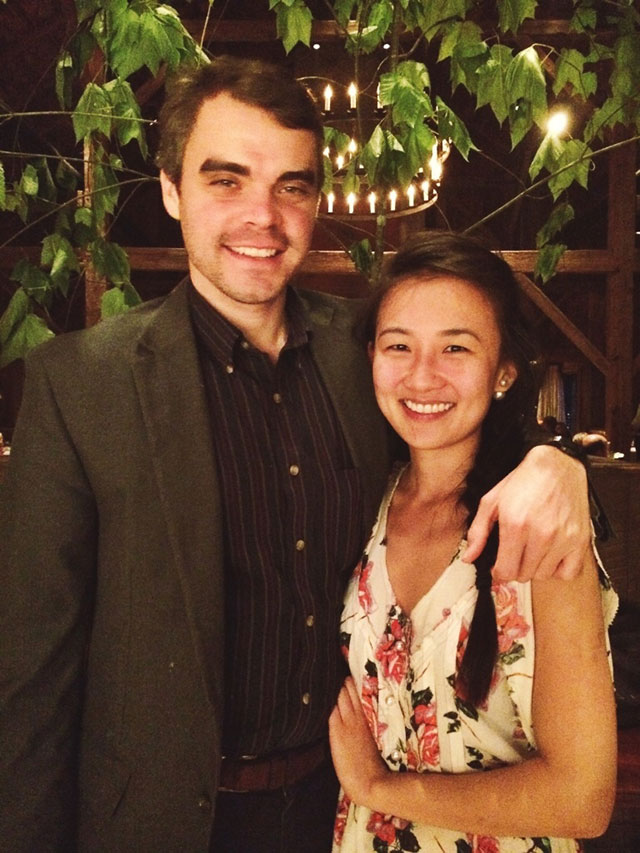 “We met on OKCupid and had our first date at a bar. I wore a Costello Tagliapietra for Uniqlo dress and had my hair down. I don’t think I wore much makeup. Maybe just a cateye,” said Helin.

“You wore a yellow dress,” said Dustin. “I liked it. I thought you looked very nice.”

“It was the first day of college and I was moving into my freshman dorm. Michael was a senior and my orientation advisor, so he helped me move in,” said Tess. “I specifically remember planning my outfit so I would look cute and ‘chill’ and like I thought a college freshman was supposed to look—jorts, black flip flops, a long-sleeved navy Micahel Stars T-shirt, and matching navy eyeliner. Michael says he remembers me wearing a white tank top and thinking ‘this is a girl I need to go after,’ which sounds so creepy, but he’s not creepy at all. I promise.”

"We were on a bus trip with a big group to tour the South Coast of Australia for a weekend,” said Eric. “I don’t remember if it’s the absolute first time I saw her, but it was the first time I really saw her. She was stepping off the bus and the sun was shining behind her. She was laughing and smiling. She had on cutoff jean shorts and a plain dark T-shirt. I thought she had the most beautiful smile."

“We met at a bar with a couple of friends who were setting us up,” said Eliza. "I was wearing one of my favorite outfits at the time: a red lace dress from Urban Outfitters, black tights, dark brown lace-up Frye boots, and a jean jacket. I don’t really remember my makeup, but I probably wore some foundation, mascara, and MAC Ruby Woo lipstick, which is about as elaborate as it gets for me. Sam says he remembers thinking that I looked ‘too cool’ for him, but I had a flask of bourbon in my purse, which he found charming for some reason.”

It was the first day of school at the college I had just transeferred to and I remember wanting to look cute, but not like I was trying too hard,” said Alex. “I went with basic black jeans and a grey and blue flannel shirt with black high heeled booties. It was the first day of school so I straightened my hair and did my makeup, but I definitely wore sweats, a bun, and no makeup every day after that.”

“I remember first seeing her as she walked into class and hoping she would sit near me,” said Tim. “I remember thinking that she had style and was very well put together. It was a nice look."

“We met at a football game. I was wearing black leggings with the knee length Ugg boots that you could flip and roll down to create some crazy situation that made it look like two poodles were on your legs. I had a poof in my hair and I thought I looked hot AF, at the time” said Danielle. “He definitely remembers my outfit — I was wearing the team sweatshirt of his rival school. He hated it. I threw it out once we started dating.”

"We met on Bumble," said Ali. "It was President’s Day when we met in person for the first time. I didn’t have work, so I figured why not go for a day-date, because if it’s horrible I can leave and will still have my night free. We were meeting at beer hall-type bar, so I wanted to keep it casual; I wore a fitted, long sleeved grey T-shirt from H&M, ripped skinny jeans, a floral scarf, and tan booties with kind of a western feel. It felt put-together and cute without looking like I was high maintenance, which I am."

"I don’t fully remember," said Jesse. "Oh god, this is bad! Why did I agree to this? The point is she looked beautiful, we ate sausages, and we’re still going strong."