Close
WATCH OUR VIDEO SERIES!
© 2021 Cosmopolitan Philippines
Sorry, no results were found for
Follow OPPO on

Because of the pandemic, it’s become way harder to serendipitously run into the love of your life. But that shouldn’t stop you from dating altogether. Online dating is a great way to meet new people and possibly form long-term relationships. Don’t believe us? Just ask these four couples who are still going strong after meeting each other on dating apps.

1. “I brought two ‘bodyguards’ with me [on our first date]. That’s how nervous I was back then.”

There was no comical convo starter involved in Mary Rose and Michael’s first-ever exchange. It was just a simple “Hi!” and a continuous flock of prompt responses that kept the conversation going. Three weeks in, Michael, who lives in Alaska, told Mary Rose that he was ready to see her and that he already bought a plane ticket to fly to Manila—all that even without an official label. 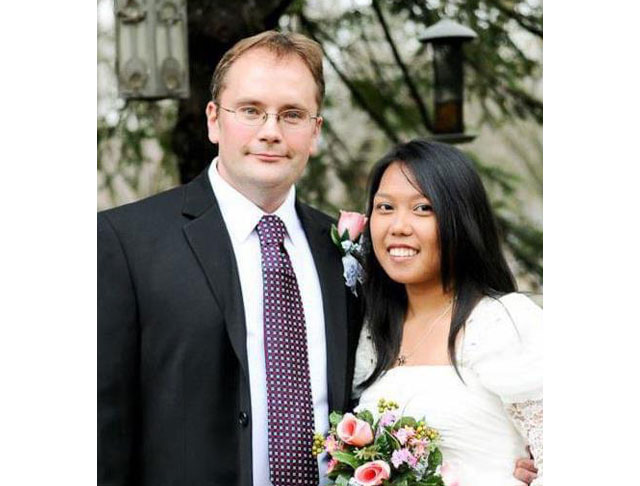 On their first date, Mary Rose had two of her two kuyas tag along. “That’s how nervous I was back then. Pagkatapos magpakilala sa isa’t isa, umalis din muna yung mga kasama ko para bigyan kami ng privacy.” And it went pretty well, with Michael closing the evening with a “See you tomorrow,” which was both a surprise and relief to her. As she quipped in her head then, “I guess it’s a good thing, right? Ibig sabihin siguro nagustuhan niya ako, ‘di ba?”

At present, they live in Alaska together with their child, Matthew. Recalling the days of online dating, Mary Rose's advice for people on dating apps is to know what you want, especially if you're in it for more than just a hookup. “When you create your profile, just be honest. Never put false information about anything. If you’re signing up for a relationship, then trust is important.”

2. “We were talking about how we both wanted to see the new Ateneo Art Gallery, so he tried to surprise me, but I had a feeling he’d be there.”

Although they were batchmates in college, Angela and Martel’s paths didn’t cross until they matched in 2019—three years after their graduation. But this common ground did help in propelling their relationship forward, starting from Martel’s use of his Ateneo graduation photo as his profile picture. As Angela recalls, that, along with his professional information on his dating profile “helped [her] figure out right away that the chances of him being a serial killer were pretty slim.” 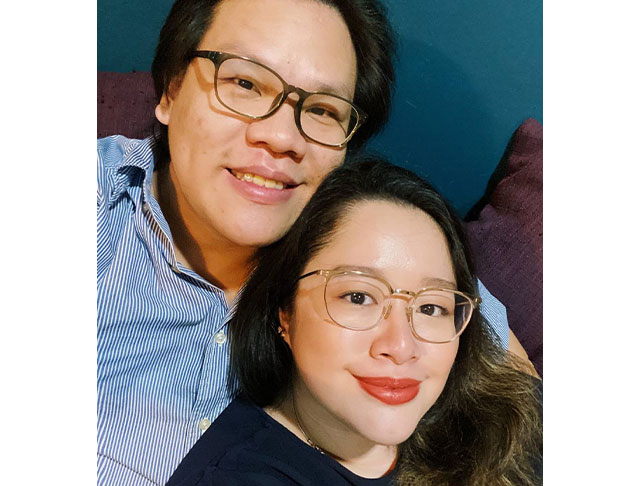 Eventually, they met up at the new Ateneo Art Gallery. “I told him I was planning to go, and he tried to surprise me, but I had a feeling he’d be there,” said Angela. They spent the rest of the day just roaming around the campus and eating ice cream by the cafeteria. “It was my first time back in Ateneo since I graduated,” said Angela. “It was nice because we were somewhere we were both comfortable and familiar with, and we had a lot to talk about.”

For now, the couple is taking their time to do things. “We both still have a lot of growing up to do as individuals, but that doesn’t mean we can’t be thoughtful about what our relationship is becoming and how we [need to] work on it together.” As people who started out on an online relationship themselves, Angela and Martel have enough ~reliable~ ideas on how to make it work. Among other things, make sure to disclose interesting points on your dating profile while still leaving room for curiosity; capitalize on online content (like cool IG accounts, photos, or articles that are interesting for both parties) to keep the conversation going; and ultimately draw the line on what you want out of the relationship so you don’t end up disappointed or mislead anyone in any way.

3. “Nothing really changed except for the fact that we are now married and living in the same house.”

When Stephanie downloaded Tinder, it was only because she was curious and bored. This didn’t wave RJ, her match, one bit, and thanks to her sense of humor, he was insistent on keeping the conversation going. “I [once] told him that I was going somewhere with my family and wouldn’t be able to talk to him since I didn’t have any load, [though] I really did have some,” Stephanie shared. “Then, he sent me P200 of load. From there, I saw his eagerness to talk to me and get to know me.” 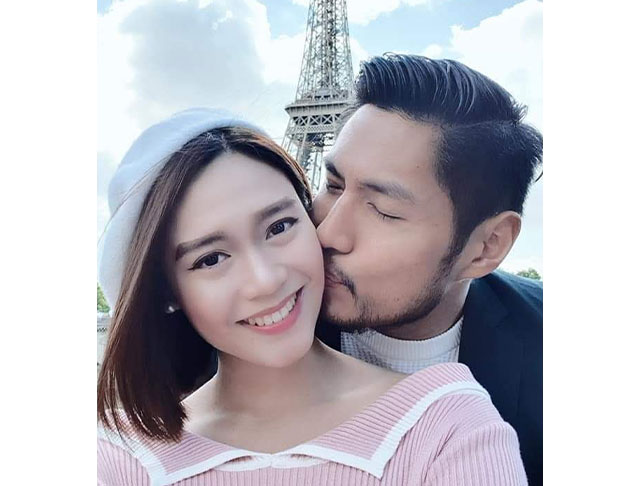 It only took a week for the two to meet and they instantly clicked. After a month, they became official. They’ve been together for seven years now— and married for two. Their advice for those in dating apps like they were? “Don’t stop until you find the right match for you. Just enjoy, but be [vigilant] because not everything online is true.” And one way to ensure that you’re talking to a *real* person is by checking their Facebook and Instagram profiles. “Dating apps are not 100 percent certain or successful. Most of it is luck and the commitment of both parties to make the relationship work.”

4. “I was just kidding when I invited him to come over, but he did it anyway.”

It’s pretty unusual for someone to respond well to Mik’s dry humor—only a few of her friends really understand it. So when she started talking to Toti on Tinder and found that he understood and even matched it, she entertained the thought of hanging out with him. After a year of on-and-off conversations on Tinder and Facebook, they finally met—but only by a joking invitation from Mik’s end. “I was just kidding when I invited him to come over [to my workplace], but he did it anyway,” she said. “It was awkward because she was on duty,” Toti recalled. “Her boss was there and I couldn’t talk to her. But I was drawn by her charm.” 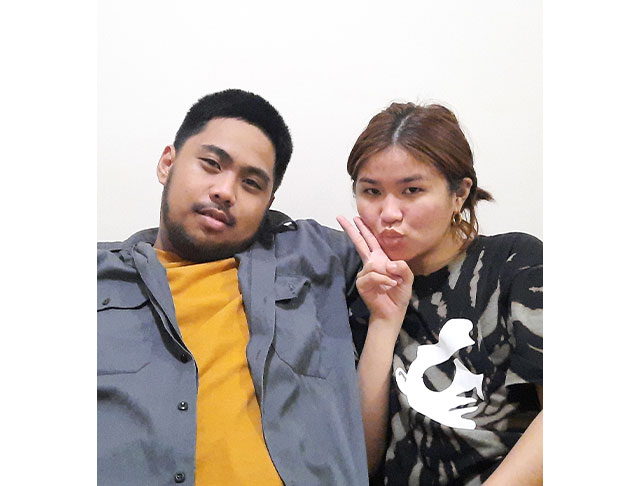 It’s safe to say that they've been inseparable since. The couple is currently planning to move in together, but at the moment, they’re extending support to each other from their own places. And despite their daily debates on what to eat, Toti says, “I want to be with her forever, I want to do lots of things kasama siya.” Both of them acknowledge the downs that come with online dating, especially during the quarantine. “A lot of people are just bored and want to be occupied for the time being. But [we’re] not saying that there's no hope on dating apps; you just have to be persistent about finding the right one.” Their tips to a higher chance of success: “Make your profile photo more interesting and put your personality to it. [Also] have some catchy phrases on your bio, [including] your hobbies, likes, etc.”

To be sure that your photo is one eye-catching display on your dating profile, use a phone with a powerful camera, like the OPPO Reno5 series. The latest Reno5 4G and Reno5 5G are equipped with a quad cam setup with a 64MP main camera, 8MP Ultra Wide-angle camera, a 2MP macro camera, and a 2MP mono lens. On the front, the Reno5 4G features a 44MP selfie camera while Reno5 5G has a 32MP selfie camera. And because the OPPO Reno5 series is equipped with the industry-first OPPO FDF Portrait Video System, the image quality is naturally optimized, resulting in amazing photos that’ll get you a bunch of matches on Tinder. *Wink!* You go, Cosmo girl!

Enjoy a picture-perfect date this month! Get a chance to win a Zoom date with OPPO Cuties: UAAP Basketball Star Athlete Ricci Rivero, Actor David Licauco, Miss Universe Philippines 2019 Gazini Ganados, or Model Jessica Yang. To join, all you have to do is swipe away on Tinder to find them. The winners will also get a free OPPO Reno5 smartphone together with their Zoom date Valentine’s kit. Promo runs from February 10 to 15 only and winners will be announced on February 16 on OPPO's social media pages.

The OPPO Reno5 comes in the colors Starry Black and Fantasy Silver. To know more about this device, visit www.oppo.com/ph and follow OPPO Philippines on Facebook.

This article was created by Summit Storylabs in partnership with OPPO.
Shop the items in this story!