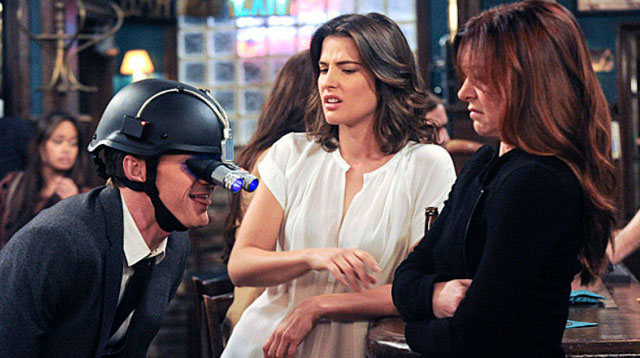 How I Met Your Mother/CBS

There's no end to the amount of weird shit and awkward encounters women have to deal with in public from men who don't know how to just walk up and start a normal conversation with them. A recent Ask Reddit thread sourced some of the absolute worst pick up moves people have seen men try out on unassuming women, and there are some serious themes. Basically everyone needs to ditch the weird acts and penis references. Not to be This Person, but seriously. Can't we all just be ourselves?

1. Doing weird tricks like hitting on someone is just one-man theater performance.

2. Walking up to someone and having zero plan for how to carry the conversation forward.

This makes for an incredibly awkward encounter for all. At least have two or three things intelligible things to say before walking up to a stranger. As SNOWMANCOFFEECUP wrote, "Saw a guy that is extremely tall and wide eyed sit at a bar, turned fully to face this girl, and stared at her like O.O for a solid 5 seconds before saying, 'Are you drinking wine?' She just said yeah and walked off. It was probably the most awkward thing I've seen."

3. Referencing your penis in any way at all.

Incredibly presumptuous for you to assume any random woman wants to some facts about your genitals before she knows anything else about you. This story from rafmanbegins on Reddit about a guy unsuccessfully hitting on women with an incredibly odd technique should be enough to convince you otherwise. "His routine was to run up to a girl on the street at night and yell out, 'LET ME SEE YOUR HANDS!'" rafmanbegins wrote. "The girl would then slowly raise her hand and this guy would put his hand against it Tarzan style. Keep in mind this guy literally had toddler size hands. The girl would then say, 'You have really small hands.' To which he'd practically cut them off with, 'WELL I HAVE AN EVEN SMALLER DICK!' then he'd just stare with those buggy eyes."

4. Bragging about how much beer you can chug or some other faux-masculine drinking thing.

This is not only dangerous when it gets into drinking territory, but it's incredibly unsexy. There's a big theme on the Ask Reddit thread about guys who alleged they could perform some unthinkable drinking feat, only to fail miserably. "Guy in in my fraternity kept telling this girl he was into he could do a 100 second keg stand," wrote Lomax0. "Poor guy made it to 56 seconds before vomit shot out of his noise and all over the keg tap spout thingamabob. This was witnessed by about 50 people. Half were horrified, half were dying of laughter. The guy's face had turned white from embarrassment but decided to go with it. He stood up smiled at the crowd and said, 'Soothing,' and walked away. The girl was completely disgusted and left."

5. Using any sort of pick-up line you feasibly could've sourced from the internet.

I get why you might think this could be cute. Like, in a so-bad-it's-good kind of way. But this is probably not worth the risk, and if anything, merits a pretty hard eye roll. "My friend threw a SUGAR packet on the ground as the waitress walked by," wrote jakeep15. "He told her she dropped her name tag on the ground."

6. Asking a woman if she has a boyfriend, as if that's the only barrier between the two of you riding off into the sunset together.

Believe it or not, not all women are just waiting for some man to come by and claim them as girlfriend before it's too late. Just because someone is single doesn't mean you have a green light to start chatting her ear off.

7. Bragging about how much money you make by unnecessarily dropping a ton of it on some incredibly expensive bottle of champagne.

A very good way to get shut down and totally owned by the bartender who has to hand you back your card with a DECLINED receipt. "One of my friends ordered a bottle of champagne at a bar one day after bragging about his supposed wealth," wrote welfareplate. "His card was declined."