The Weird Trait Guys Look For in a Date

Research has pinpointed the number one quality dudes seek in a new girlfriend. We definitely weren't expecting this.
Jan 9, 2013
Post a Comment

A Pew Research Center survey on marriage asked what qualities make someone a desirable partner. Ready for this? Ninety percent of men responded “being a good mother” (and that was the top response). Experts say that on an instinctual level, guys are driven to hunt for someone with whom they could see themselves having kids. And, this holds true for dudes who are nowhere near ready for diapers and bottles.

“Finding a mate to pass along your DNA is a primal human impulse,” says Meredith Small, PhD, professor of anthropology at Cornell University and author of Our Babies, Ourselves: How Biology and Culture Shape the Way We Parent. “A man naturally responds to those biological urges by moving forward with a woman who will potentially be able to raise his children, even if he doesn’t want kids soon—or ever.”

So, we asked: what is it exactly that tips off a guy that the woman he’s currently barhopping with or taking out to dinner and a movie will be great mommy material in the future? It’s actually surprising little behaviors that tell men a whole lot, according to experts. They highlight the three biggies here. 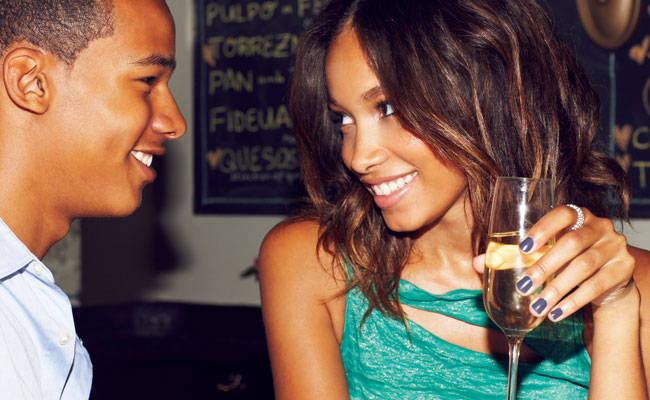 You Don’t Flip Out If You Lose Your Cell

It’s hard not to have a mini meltdown when you realize you left your iPhone in a bar or experience some other setback, like driving an hour in the wrong direction. But keeping cool is an indicator you can handle more trying stuff, including the inevitable ups and downs that happen once you have a couple of ankle-biters.

“It’s fundamental to infant survival that a mother be able to react calmly and think on her feet in a crisis situation,” Small says. Back in prehistoric times, she would need to have the wherewithal to grab the kids and run from a predator—becoming hysterical would quite literally be the kiss of death. And, it’s just as important today: Showing you can stay levelheaded when minor things go wrong proves to him that you’re a strong, capable woman he can trust with the kiddies.

You Can Just Sense If Something’s Wrong With Your Guy

One similarity between men and babies: Neither is awesome at verbalizing what’s going on with them. To figure it out, you have to be a pro at interpreting subtle changes in their facial expressions, body language, and tone of voice.

“Men go for women who are perceptive, like those who notice tiny variations in a person’s behavior and mood,” Small explains. “If you can pick up on how someone feels without their telling you, it’s a sign that you’ll probably also be able to recognize a baby’s needs, such as whether she is crying because she’s hungry or because she’s tired.”

You Tell Him Funny, Interesting Stories About Your Day

“Engaging storytelling is how mothers throughout the ages have passed down traditions, explained cultural beliefs, and relayed the dos and don’ts of the community to their children,” says anthropologist Helen Fisher, PhD, author of Why Him? Why Her? How to Find and Keep Lasting Love.

A mom who gives a good chat also teaches her munchkins social skills, helps them learn how to express themselves effectively, and gives them an edge later in life (studies have shown that the more parents converse with their children, the more successful and well-developed they will become). Lesson learned: Don’t be boring.

What better way to show him you’re mama material than by casually talking about how you’d like kids someday, right? But dropping the term baby too soon will freak him out. “Men interpret conversations about children as one giant dotted line you want them to sign on,” says Seth Meyers, PsyD, author of Dr. Seth’s Love Prescription. “Even if he intends to have kids, mentioning it before he’s ready often makes a guy feel boxed in and can bring out fears about intimacy.”

Of course, eventually you want to be sure you’re on the same page. “Once you’ve been together long enough to know that he’s someone you want a family with, broach the topic organically, like in the context of discussing your birthday,” Meyers says. “Just avoid fixed timelines and emotional language.” Instead of “I want to have a kid by the time I turn 30,” try “Next year, I’ll be 30, and I’m starting to think about having kids at some point.”