You—like everyone—could stand to know a bit more about your anatomy, and especially your ~sexual~ anatomy. There are so many parts and structures that make up the female sexual and reproductive anatomy, so you get a pass if you aren't deeply familiar with each and every one. Dr. Jessica Shepherd, an OB/GYN and partner of the Know Your Birth Control Campaign, offered some insight to clear up some of the mystery around the female sexual anatomy and help create a society of wonderfully vulva-literate people. 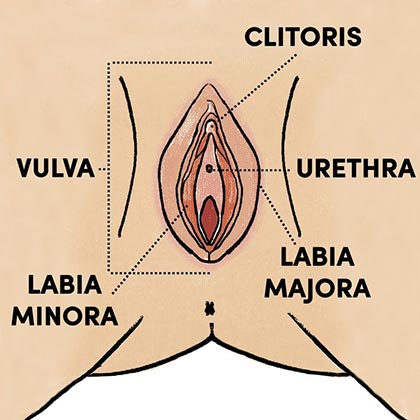 1. No, what you see on the outside is NOT your vagina.

Despite popular use, vagina isn't a general word for the entire swath of bodily real estate below your hips and above your thighs. Vulva is the general term for the external parts of the female sexual anatomy. The vagina itself is a tube that connects the vulva to the cervix and uterus, and serves as the birth canal during labor and is where menstrual blood flows from during a period.

2. The only part of the vagina you can actually see externally is the vaginal opening.

The opening is the hole (of which you have three, counting the opening of the urethra and the anus) that you can see on the vulva, and is how you insert everything from tampons and menstrual cups to fingers and penises.

3. You have two sets of labia.

They're called the labia majora (the outer set) and minora (the inner set). A lot of people refer to these colloquially as "lips" because that's kinda what they look like.

4. And there's no rhyme or reason to which set of labia is bigger or smaller.

You might think "majora = bigger, minora = smaller," but that is very much not the case. Labia actually come in a range of sizes, just like everything else about the human body. Some people find their labia minora are longer, and others find the opposite.

5. Your labia serve an important purpose and you should take care of them.

The labia are responsible for keeping your vagina safe and protected from bacteria and other pathogens. They also don't take kindly to things like lotion, scented soaps, or basically anything that isn't water and other body parts and/or sex toys. Be gentle! And that includes being gentle in whatever form of hair removal you do/don't partake in.

6. The clitoris and the head of the penis essentially have the same function.

7. But believe it or not, the clitoris is actually much bigger than the head of a penis.

It's fun to think of this as a "tip of the iceberg" situation. The portion of the clitoris that's accessible externally is only the very tip of it. The little button structure on the surface of the vulva extends deep into the body, down to the mouth of the vagina, and has structures that extend off of it like wishbones. It's a whole big thing!

8. The whole G-spot thing is kind of a vaginal urban myth...

For the most part. If you go spelunking inside of your own vagina, you're not going to find a magical location that could be labeled the G-spot. But that's not to write off the countless people who swear by G-spot stimulation and orgasms. What people probably think of as their G-spot is mostly likely an internal extension of the clitoris. Truly, a ~magical~ structure by all accounts.

9. The size of your clitoris has nothing to do with your level of sensitivity.

Some people have pickle-sized clits and others have more of a cocktail weenie-sized situation. It doesn't really matter either way when it comes to how sensitive you are. 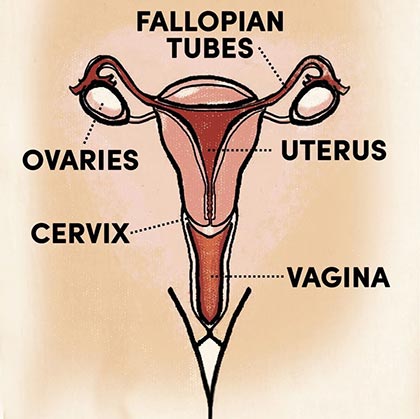 10. The skin most people inaccurately refer to as the vagina is actually the mons pubis.

If you're looking at the whole thing straight on, the mons pubis is the mound of flesh directly above your vulva. It's what generally grows pubic hair once someone hits puberty.

11. Your cervix divides your uterus and vagina and is the thing you sometimes bump during sex.

As Planned Parenthood so joyously phrases it, the cervix is a little structure at the opening of your uterus that looks like "a donut with a tiny hole in the middle." This hole is where menstrual blood comes out and sperm goes in, and is the thing that dilates during childbirth. If you've ever had an IUD placed, it's also what your doctor dilated (a tiny bit) to place the device.

12. Your uterus is where a fetus develops during pregnancy.

So it can also be called your "womb," but truthfully it feels creepy to refer to it that way unless there's a fetus in there. The uterus is pear-shaped and about the size of a closed fist.

13. When you're ~*aroused*~, the uterus lifts up to elongate your vagina.

This is called "tenting" and is a really good fun fact if you're at a particular sort of party. ;)

14. You've got two ovaries and that's where all your eggs live.

Yes, it is true that you're born with all the eggs you'll ever have. I don't like to think about this! But it's kinda fun. Your ovaries are also responsible for producing the hormones estrogen, progesterone, and, yes, testosterone. They start to release an egg each month during puberty as part of the menstrual cycle.

15. Your ovaries don't switch off left and right with each menstrual cycle.

It's convenient to think that your left ovary releases an egg one month, and then your right the next month, and so on and so forth. But as Dr. Shepherd explained, it's actually pretty arbitrary. She said whichever ovary has the more developed egg, basically, is the one that's going to release it. So you could go three months on the left side, theoretically. Bodies! So weird.

16. Your fallopian tubes connect the ovaries to your uterus.

And are basically like a big slide for your eggs. Sperm also travels through the fallopian tubes to get to the egg waiting in the ovary.

17. You probably still have your hymen, despite all the rumors.

Yes, even if you've had sex a million times, you probably still have your hymen. Shepherd said it doesn't tear and just go away, like all the girls in middle school said it would. What actually happens is the hymen stretches a bit, and that can cause a bit of bleeding the first time you have sex. So next time someone (rude) says, "Yeah you can totally tell if a girl is a virgin if she still has her hymen," please proudly say they are incorrect.